Previously on our blog, we’ve looked at genre maps of Strategy games and Open World games. This week, we’re doing maps of the Shooter genre.

The Shooter genre is much maligned in mainstream media, and it’s easy to end up with a monolithic view of who Shooter gamers are. In this post, we’ll dive into the motivation data to explore the many interesting variations among Shooter gamers.

If you’re a regular reader of our blog and familiar with our motivation data and how we generate these genre maps, feel free to skip the next 2 sections.

Our working assumption is that the core audience a game manages to attract provides the best proxy score for the game as a whole. A game with a good elaborate narrative will generally attract gamers who are interested in elaborate narratives. And a game might try to do many things at once, but its core audience will reveal whether only certain aspects of the game were playable and appealing.

Certainly, the top 1% most hardcore gamers of any game (on any dimension) will play it in a dramatically different way from everyone else, but we would argue that a game’s core audience is most representative of what a game is about.

For our Shooter genre maps, we aggregated some popular Shooter game titles and franchises. In the maps below, game labels with

The Primary Axis in Shooter Games: Competition vs. Story

Factor analysis is one way to identify the primary axis within a variable space. In the case of the Shooter genre, the primary axis turns out to be Competition (duels, matches, high on ranking) vs. Story (elaborate plots, interesting characters). These two motivations are strongly negatively correlated in this genre space: Shooter games that are high on Competition tend to be low on Story, and vice versa. 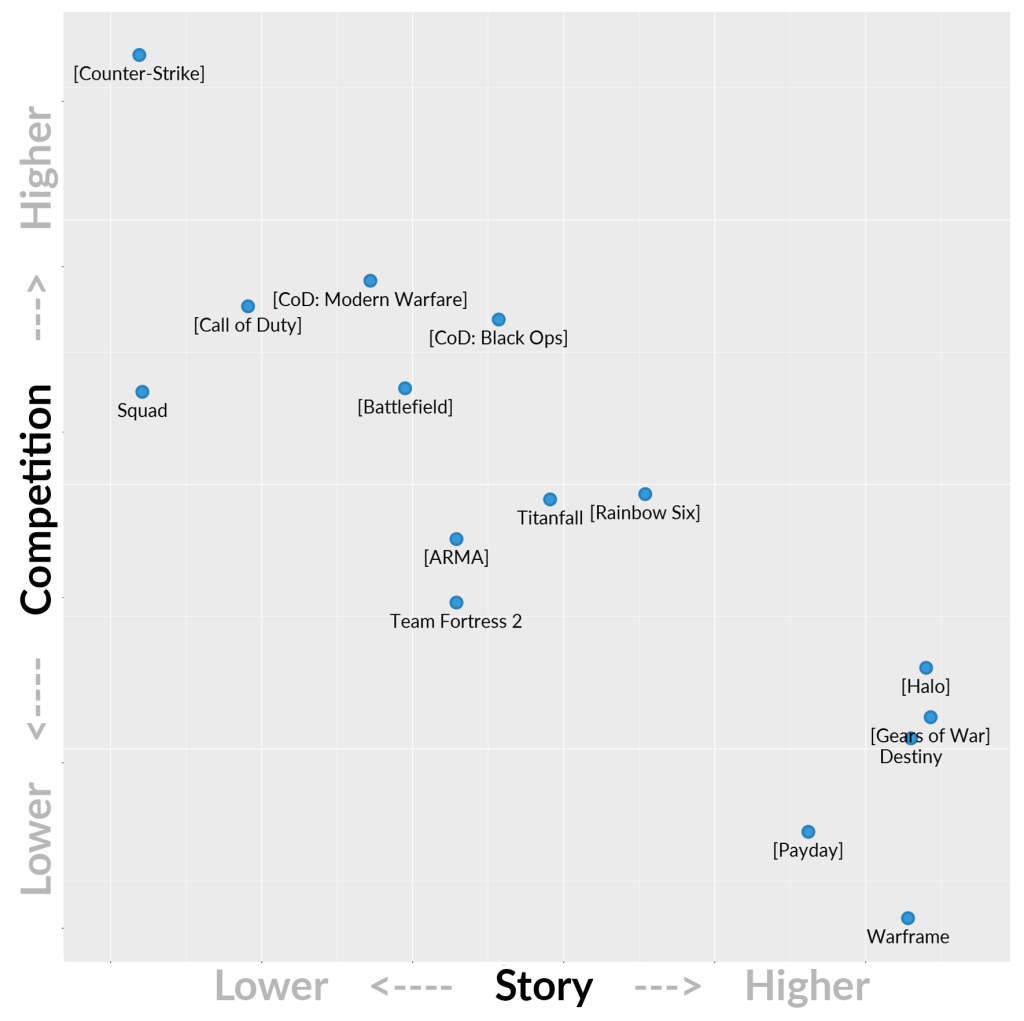 Do you enjoy Shooters because they are a great way to challenge other gamers, or because they provide you with interesting weapons in an unfolding narrative?

This primary axis highlights two very different approaches to Shooter games that lie on opposite ends of the same spectrum: Do you enjoy Shooters because they are a great way to challenge other gamers, or because they provide you with interesting weapons in an unfolding narrative? Where do you fall in that spectrum?

Most modern Shooter games combine team-work and competition in different proportions. So we decided to plot out the games on a map of Competition and Community (teams, working together, chatting). 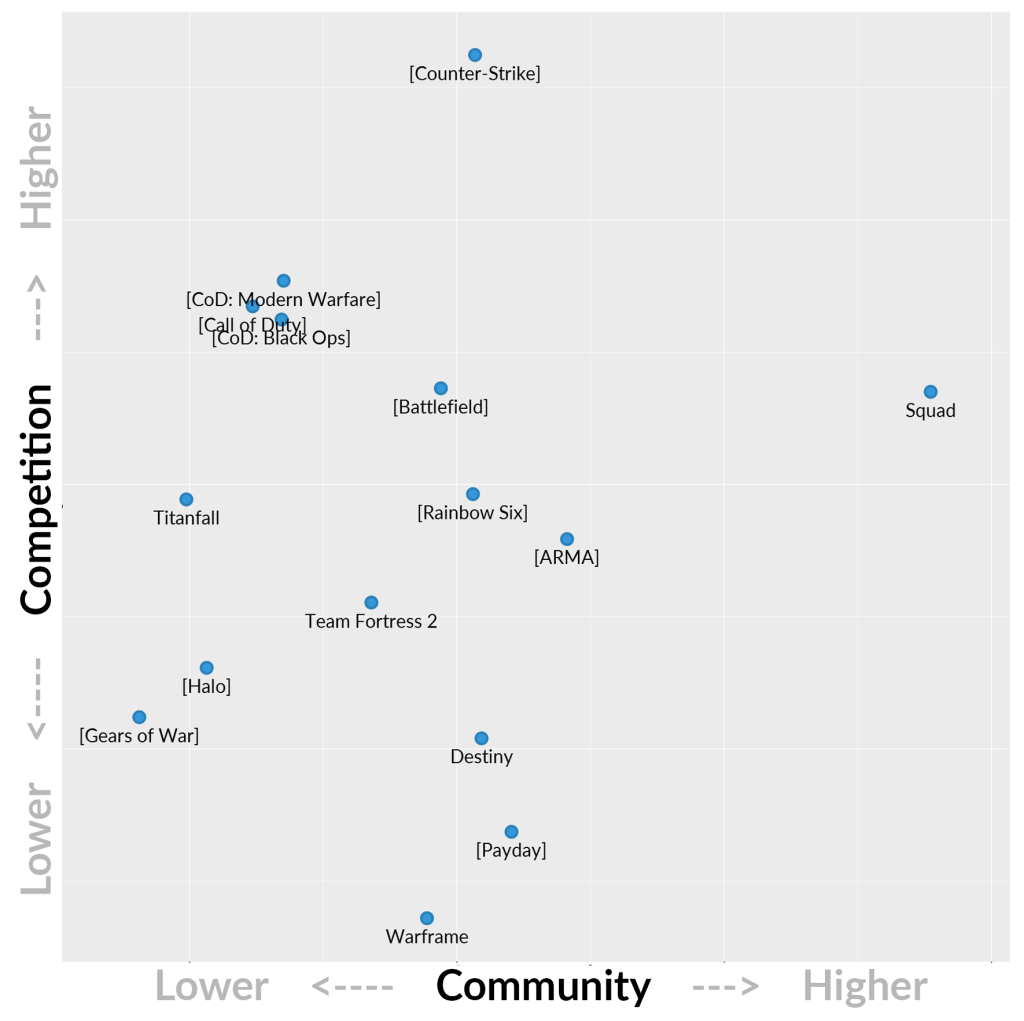 There are 2 striking outliers on this map. First, Counter-Strike is far more competitive than the other games here. If you’re looking for a very competitive Shooter, Counter-Strike seems like a good bet. Second, there is essentially only one game on the right half of the map with a very high emphasis on Community—Squad.

So what’s going on with Squad? It’s worth noting that Squad is technically still an early access game on Steam, so its current players may be more hardcore and niche in comparison. On the other hand, reviews on Steam repeatedly point out that doing well in the game requires highly-coordinated teams (compared to other Shooters), so the game itself might be more niche by design.

Let Me Think About That

The amount of thinking and planning varies among Shooters. The Call of Duty franchise is known for encouraging more of a run-and-gun mentality, whereas Rainbow Six has an actual planning phase before the actual mission. In this final chart, we’ve plotted Strategy (thinking ahead, making decisions) against Competition. The chart shows the more tactical shooters on the right, with the more action-oriented shooters to the left. 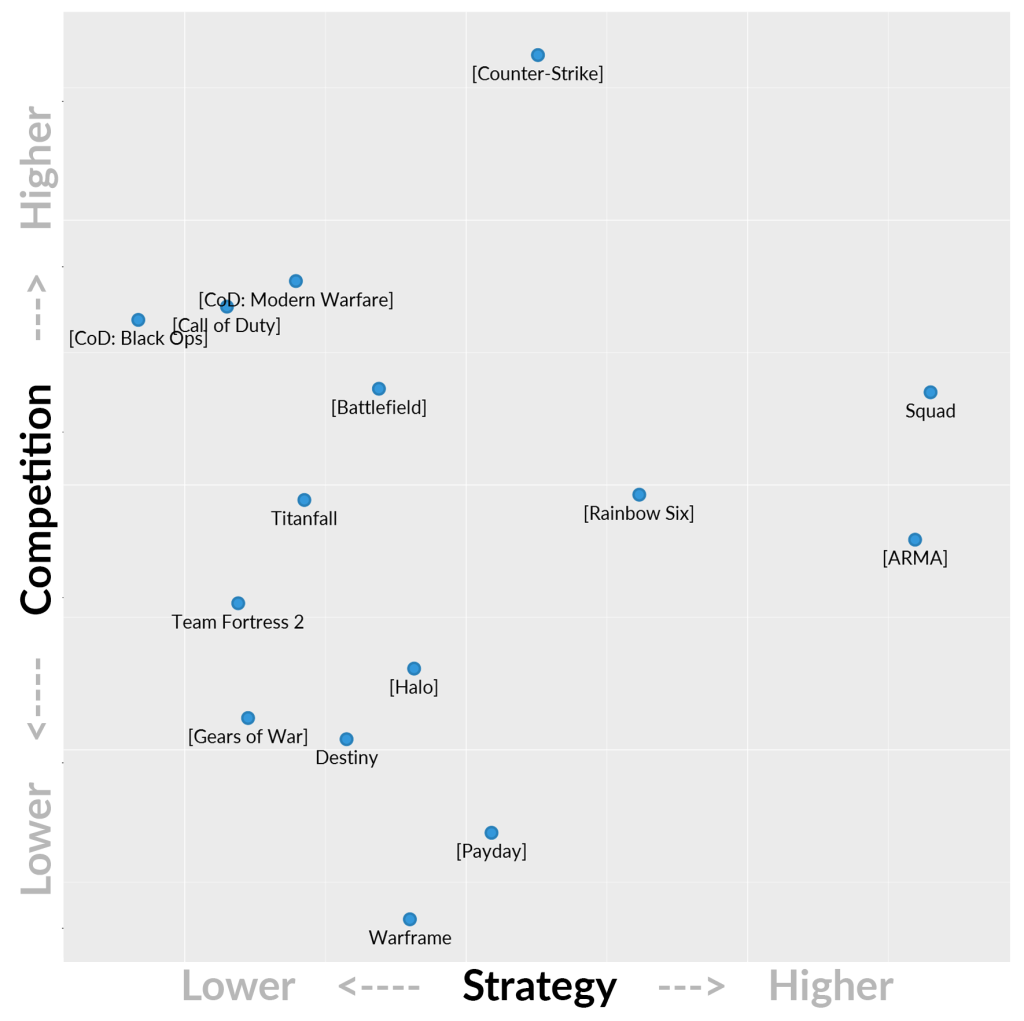 At the Quantic Foundry office yesterday, Nic Ducheneaut and I had an interesting discussion about the relative sparseness of the map on the right side. One idea is that the range of Competition is constrained beyond a certain amount of Strategy, an effect we saw among Strategy games.

Another idea is that we’re now in MOBA and 4X territory, and that space only looks empty because we’re not plotting MOBAs and 4X titles on the same map. Or in other words, at that level of Strategy, first-person shooters become unwieldy in terms of managing and processing information compared with top-down maps (as in Civilization or League of Legends).

Tactical Shooter Gamers: What are games you like to play when you’re not playing Shooters?

Here’s a question for you tactical shooter gamers, what are games you like to play when you’re not playing shooters?

We’re using these Shooter genre maps to lay the groundwork for an upcoming post where we describe a technique for articulating the core and differentiation design pillars for game genres. Stay tuned!