The Dark Side Attracts Younger Gamers

RPGs are known for creating deep narratives where players are able to immerse themselves in a compelling world and get lost in their “role”. As developers seek to create more immersive worlds, characters have become more and more customizable. Not only can players choose what their character looks like, or their base stats and abilities, but also their ethics and moral code. Will their character be a champion of the helpless, or a power crazed tyrant?

Not only can players choose what their character looks like, but also their ethics and moral code.

While this mechanic has experienced a resurgence (Mass Effect, inFamous, Bioshock, and Knights of the Old Republic series being some of the more popular examples), it is not a new one. A more classic example would be from 1985 when Ultima IV introduced a virtue system that, depending on how the player answered morally ambiguous questions, would determine their class and other gameplay details.

Do gaming motivations and demographics impact the choice of “good” or “evil” factions in RPGs? It turns out they do, but sometimes in surprising ways.

Here at Quantic Foundry, in addition to the Gamer Motivation Profile, we also have additional research surveys that gamers can participate in. These surveys tackle a variety of game preference questions, and allow us to link gamers’ responses back to things like their motivation scores, gender, and age. 1,082 gamers participated in this research survey. Five individuals left this question blank, resulting in 1,077 valid responses.

Most Gamers Avoid The Dark Side

We asked gamers which of the following factions in an RPG game they were most likely to select in their initial playthrough of the game. 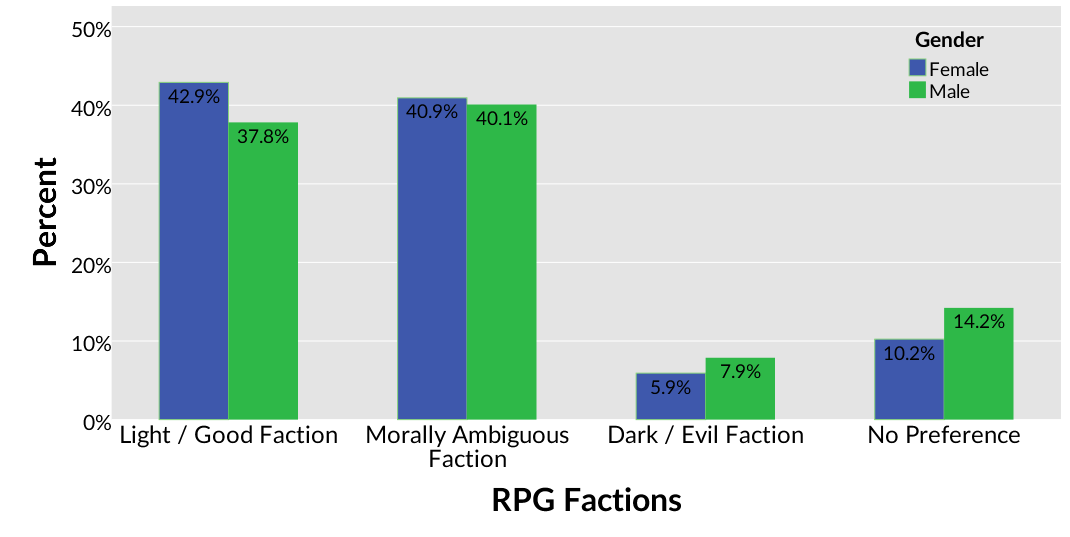 The Good/Light and Morally Ambiguous factions make up roughly 80% of the overall player sample, each taking about 40% respectively. The remaining players are split between No Preference, about 14% for males and 10% for females, and finally Dark/Evil which makes up the remaining (and smallest) proportion of the sample.

The Good/Light and Morally Ambiguous factions make up roughly 80% of the overall player sample.

The overall gender differences were minimal. One might have guessed that men would be more aggressive and go for the brute power that the dark side often embodies, or that women may be more inclined to adopt altruistic causes. In reality, when it comes to choosing between good and evil, gender doesn’t appear to matter.

Younger Gamers Are More Likely To Pick The Dark/Evil Faction

So if gender doesn’t influence faction choice, what about age? As we’ve seen in a previous article, age can have a large influence on how gamers play, and that appears to be the case here as well. 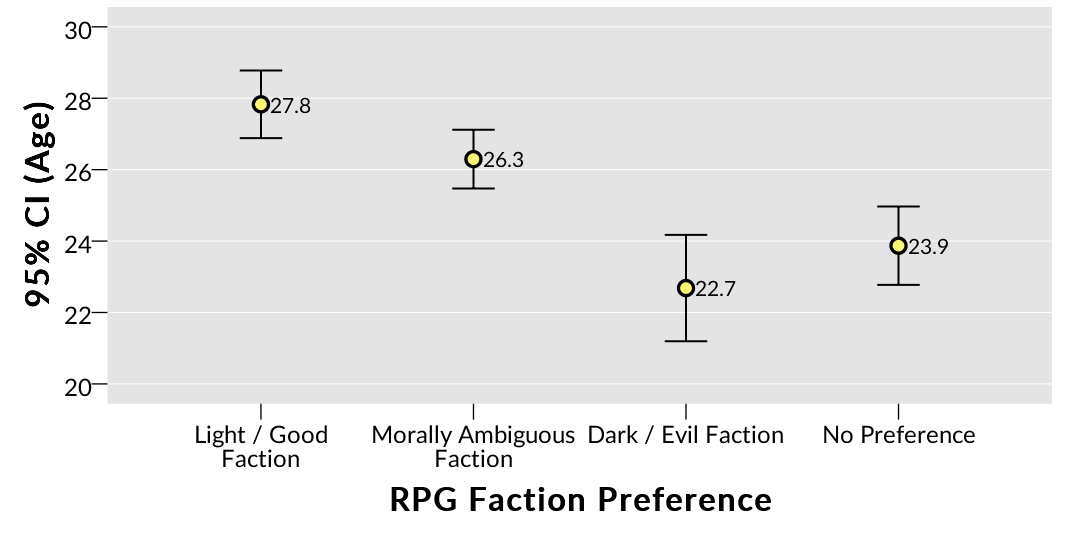 The average age of players who preferred the Dark/Evil side was 22.7 years old. Players who sought out more morally ambiguous options averaged at 26.3 years old, and finally those more inclined to seek out Light/Good factions were the oldest at an average age of 27.8. Overall, among gamers who have a faction preference, those who preferred the Dark/Evil side were much younger.

Overall, gamers who preferred the Dark/Evil side were much younger. 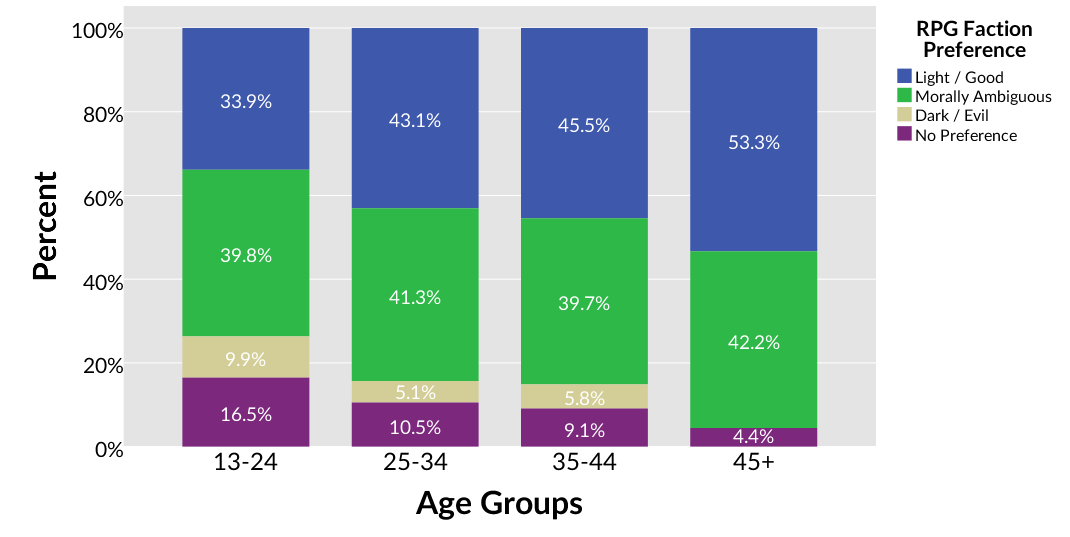 The chart also shows that the selection of “No Preference” steadily drops with age as well–ranging from 16.5% in the youngest age band to 4.4% in the oldest age band. So two things are happening with age: older gamers are less likely to pick the Dark/Evil option, and they are much more likely to have a strong preference for playing a specific faction.

It’s About Domination and Destruction

The emphasis on motivations such as Competition, Destruction, and Power implies that explicitly Dark/Evil factions are typically designed (or portrayed) to have abilities or skills that lead to chaos, mayhem, and domination. Thus, these factions appeal to younger gamers who tend to score higher on these related motivations. 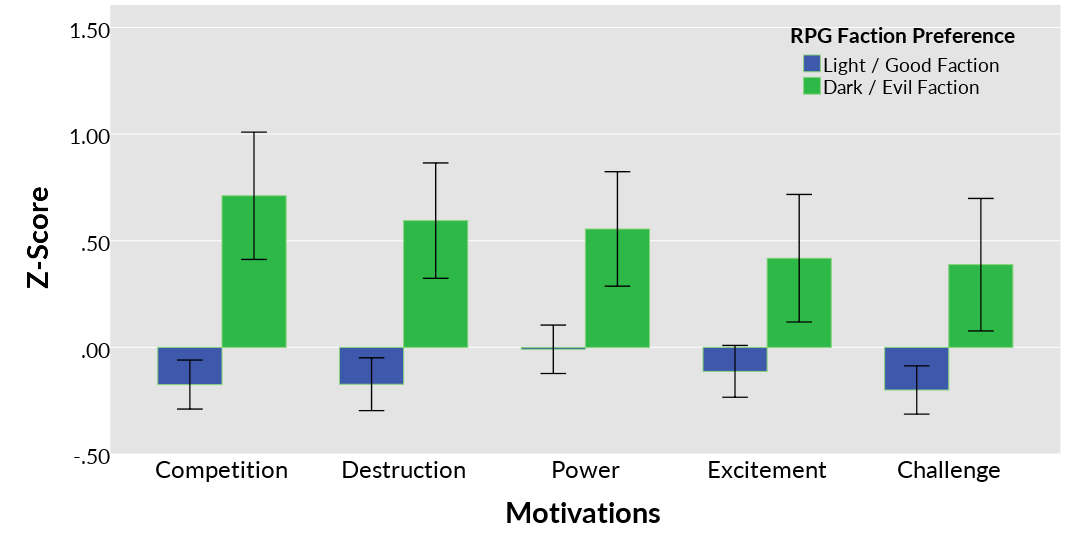 We’ve also seen that as gamers get older they start to care about different things. In fact the primary motivations of Dark/Evil faction seekers overlap with the motivations that decline the most rapidly with age.

This makes a lot of sense. If these are the primary drivers for players seeking Dark/Evil factions, and those drivers are reduced with age, then we would expect to see a shift away from the Dark/Evil side as players get older.

But What if I’m An “Older Gamer” That Still Enjoys Playing The Villain?

Good question. While the data shows a clear trend, there will always be outliers. The question is, what is keeping you on the Dark/Evil side? Maybe Competition, Destruction etc. have continued to be just as compelling for you as they always have been? Or maybe there are different motivators that have taken their place, but still align with more nefarious activities?

See how you compare with other gamers via our Gamer Motivation Profile. Maybe you’ll align with what we would expect, or maybe you are one of those outliers and you can help us to understand what exactly it is that makes you unique.