As Gamers Age, The Appeal of Competition Drops The Most. Strategy is The Most Age-Stable Motivation.

When I first started running large online surveys of gamers in the days of EverQuest, I was a 20-year-old undergrad psych major. I remember looking at the age distribution of those online gamers where about 20-30% were over the age of 30 (and a fair number above 40), and thinking to myself, wow those gamers are old.

The Gamer Generation Grows Up

Well, now I’m “old” and still gaming. And so are many other gamers who, like me, grew up with video games and have no plans to ever stop gaming. According to the ESA, the average gamer is now 35 years old. And that average will keep rising as the first gamer generation gets older.

There’s a generation of people who grew up with gaming and they have no plans to ever stop gaming.

In both the gamer and game research communities, we talk a lot about how men and women like different kinds of games or what games for women ought to look like. And yet, even though the 35+ gamer crowd is clearly growing bigger each year, it’s much less common to see discussions about how gamers change as they grow older.

The data we’ve collected from over 140,000 gamers via the Gamer Motivation Profile allows us to see how gaming motivations vary by age.

Competition is More of a Youth Motivation than a Male Motivation

Among the 12 motivations we measure in our model, the interest in Competition changes the most with age. In our framework, Competition is the appeal of competing with other players in duels, matches, or team-vs-team scenarios. 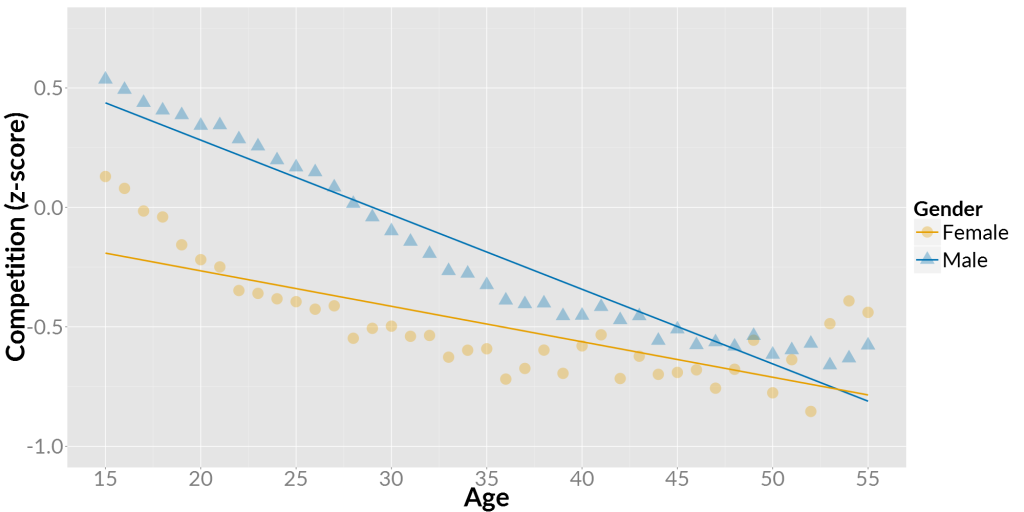 The gender difference in Competition is large at first among younger gamers, but then disappears with age. As gamers get older, the appeal of Competition declines, but this happens more rapidly for men than for women. Thus, by the time we’re past 45, the difference between men and women largely disappears.

The gender difference in Competition is large at first among younger gamers, but then disappears with age.

There’s another interesting take-away here. The biggest gap between men and women (among younger gamers) is smaller than the difference between the youngest and oldest men in our data. So age in fact explains a bigger portion of the variance in Competition than gender does.

Strategy is the Most Age-Stable Motivation

We then looked for the motivation that changed the least with age. In our model, Strategy is the enjoyment of gameplay that requires careful decision-making and planning. You might think that strategic gameplay appeals more to older gamers than young gamers, but we found that the appeal of Strategy is the most stable motivation overall. 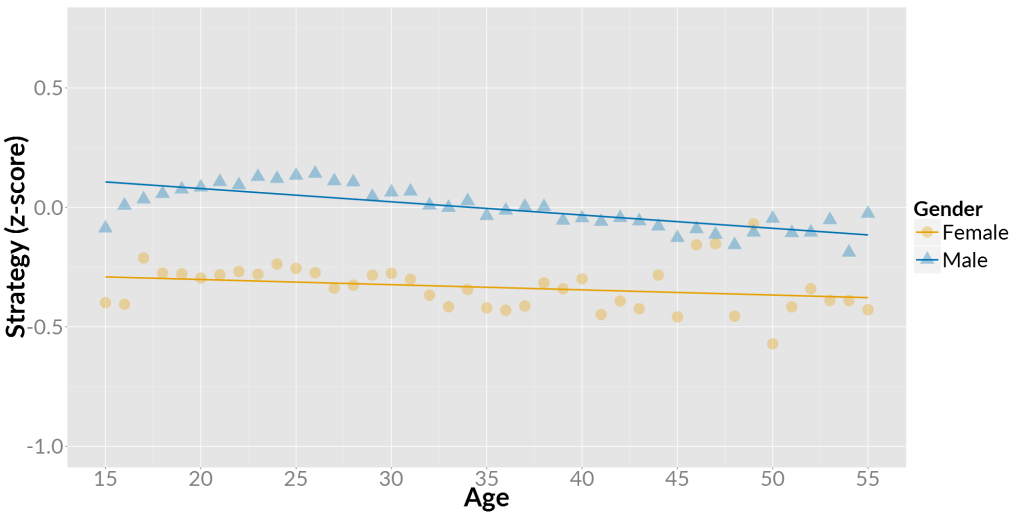 The data also showed that there is a fairly consistent gender difference in Strategy, with men indicating a higher enjoyment of Strategy in gaming compared with women independent of age.

Do Any Motivations Increase with Age?

In our data, we found that, overall, motivations decline with age. We think this is happening for 2 reasons.

First, as gamers get older and have a broader range of responsibilities and pursuits, they are less likely to rate any particular gaming activity as “extremely important/enjoyable”. Thus, their overall gaming profiles might appear deflated, but the relative order of their motivations would still be revealing.

Second, lower scores on these motivations aren’t necessarily “less” of a motivation. For example, low Excitement implies a specific kind of gameplay, and calm/stress-free gameplay is no less valid than fast/stressful gameplay. The same is true for preference for solo play (as opposed to highly social play). The appeal of solo play isn’t any “less” of a gaming motivation than social play.

There’s always a risk of extrapolating longitudinally from cross-section age data. After all, there may be generational cohort effects that are separate from the effects of aging. But what’s interesting is that our data shows consistent age trends in both the pre- and post- 35 age groups. In other words, the changes in motivations after age 35 are consistent with how motivations are changing prior to age 35.

What’s changed the most in terms of your gaming habits and preferences as you’ve grown up?

But enough about us and our data. If you’re a 35+ gamer, we’d love to hear how you perceive your own gaming habits and preferences to have changed as you’ve grown up with gaming. What’s changed the most for you?