In Open World Games, Most Players Balance Exploration with Completing Campaign. Those Who Prioritize Campaign Are Younger.

Although gamers are often lumped together as “people who enjoy playing videogames”, there is often a lot of variability in the types of things people like to do while playing. Most have a preferred genre, and even within genres a preferred style of play.

Take Fallout 4 for example, a recent release in the open world action-adventure genre. Even among the staff at Quantic Foundry, we quickly discovered that we played the game very differently. Nick was mostly uninterested in the campaign story, and once out of interesting things to explore, lost the motivation to continue playing. Nic followed the Minutemen quest line and never got to the main campaign, even though his kids (who watched the intro) kept bugging him to find and save Shaun. I enjoy poking around here and there, but find the structure of a campaign to be preferable. After a long day of work, the incredible amount of options provided by a title like Fallout 4 can be almost overwhelming without some additional direction.

We quickly discovered that we played the game very differently.

A Quick Word About the Data

In addition to the Gamer Motivation Profile, we have research surveys that gamers can participate in. These surveys tackle a variety of game preference questions, and we can link gamers’ responses back to their motivation scores. 1,082 gamers participated in this research survey. In the survey question about open world action-adventure play style, 13 respondents indicated they were not familiar with this genre, resulting in 1,069 valid responses.

Action-adventure play styles (prioritizing open word activities versus the main campaign) show almost zero variability between women and men. A surprising finding here is that only around 11 percent of gamers prioritize the campaign. Roughly 55 percent chose an “In-Between” approach while about 34 percent leaned toward open world activities. On one hand, it makes sense that an in-between approach would be popular as it allows players to experience both styles of play as they see fit. However, it is interesting to note that in other analyses, such as our look at FPS role preferences, players actually avoided mixing up their style and expressed a preference for either close-range or long-range. 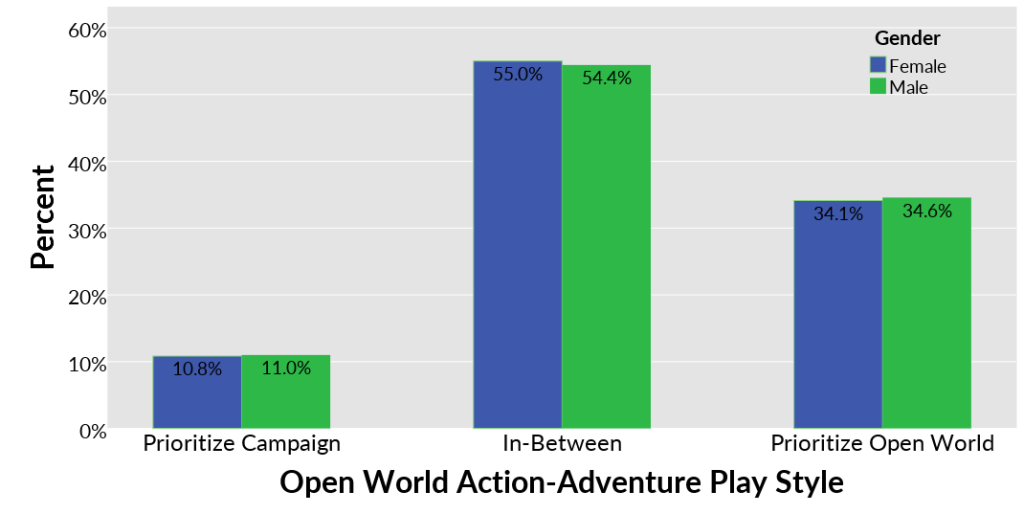 Younger players tend to prioritize the campaign while older players prioritize open world exploration (or a balanced approach). Perhaps as people age, they may have been exposed to more of the thematic elements that tend to get used when building cinematic, linear experiences. These may not be as engaging the second time around, which would lead more experienced (and likely older) players to look for more organic (open world) experiences. Alternatively, perhaps older gamers value games differently. They may see the higher replay value or longer overall play time of open-world exploration to be more attractive than a campaign that loses some of its luster after the first play through. 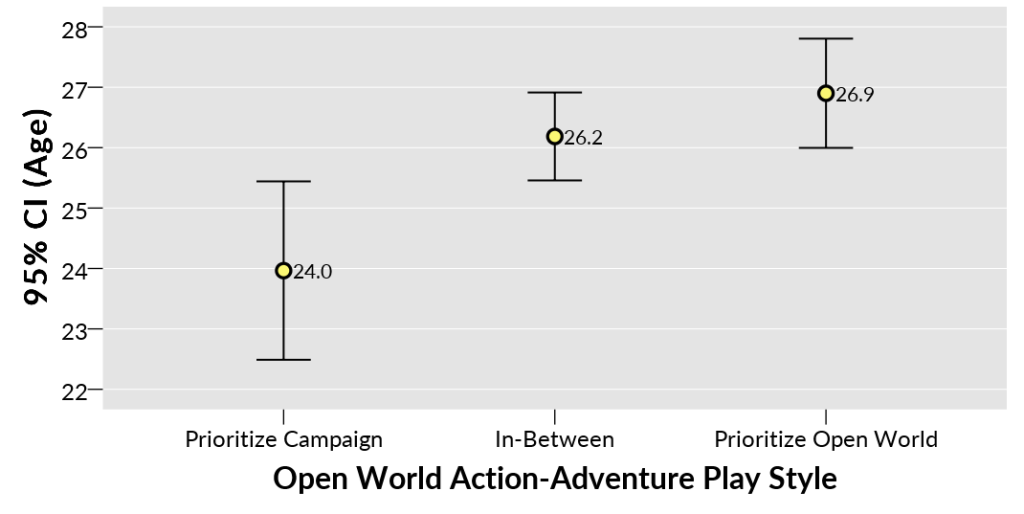 In terms of gaming motivation, the findings played out much the way we might expect. This is perhaps most clear in the Discovery (explore, tinker, experiment) dimension. Players who prioritize open world exploration score higher on Discovery, while those who prioritize the campaign score lower. Those who prefer open world play styles also scored higher on Completion (get all collectibles, complete all missions) when compared to campaign players. This makes some intuitive sense since reaching completion goals often requires a fair amount of exploration and discovery. 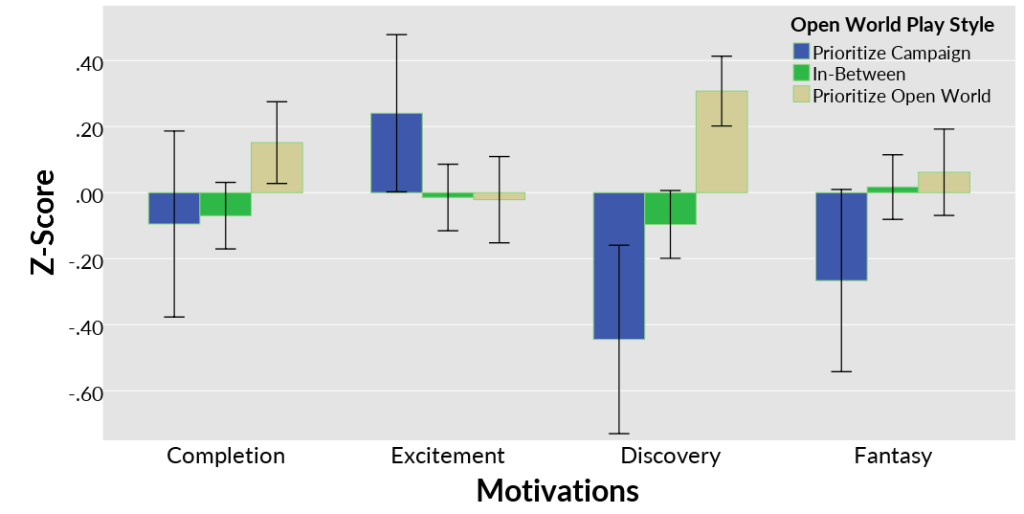 Somewhat surprisingly, those who prefer to stick to the main campaign score lower on Fantasy (being someone else, somewhere else) when compared to other groups. One idea might be that linear campaigns tend to remind players that they don’t have control over their character or the narrative, breaking the illusion of fantasy. Finally it should be noted that while Excitement was not statistically significant (p = .12) it does trend the way we would expect. Excitement (Fast-paced, action, surprises, thrills) scores are higher for those that prioritize campaigns. As the primary campaign tends to be the most cinematic, and include the climax of the storyline, it makes sense those seeking high octane thrills would lean this way.

How Did You Play Through Fallout 4?

Many games offer an incredible mix of activities and offer a “something for everyone” approach. The fact that a majority of gamers prefer a blended experience in open world action-adventure games is clearly not lost on the game industry. We see more and more open world elements being added to games that five or ten years ago likely would have been a much more on-rails experience.

How did you balance open exploration with the campaign missions in Fallout 4?

For those of you who have played Fallout 4, how did you balance open exploration with the campaign missions? Was there a turning/transition point for you where you switched from one to the other?