The Open World genre has grown a lot over the past decade, with well-known franchises from multiple game studios. These range from the space opera Mass Effect to the criminal underworld of Grand Theft Auto. Yet this is still a relatively young and fluid genre, and that made us curious to see if we could identify interesting axes in this genre space using our gamer motivation data.

In the Gamer Motivation Profile, we also ask gamers to list games they’ve enjoyed playing. This allows us to generate motivation profiles not only for individual gamers, but also for game titles. We do this by aggregating the scores from the gamers who listed that game as a game they enjoy.

Our working assumption is that the core audience a game manages to attract provides the best proxy score for the game as a whole. A game with a good elaborate narrative will generally attract gamers who are interested in elaborate narratives. And a game might try to do many things at once, but its core audience will reveal whether only certain aspects of the game were playable and appealing. Certainly, the top 1% most hardcore gamers of any game (on any dimension) will play it in a dramatically different way from everyone else, but a game’s core audience (we would argue) is most representative of what a game is about.

A Quick Note on the Open World Games

For the data, we grabbed popular Open World games like Fallout and Assassin’s Creed. In the survey, gamers were allowed to list both game titles and game franchises, and we captured this information. In the charts below, games without specific title information refer to the franchise as a whole.

1st Attempt: Pick the 2 Motivations with the Most Variance

Given that we have 12 motivations in our model, and there are only 2 axes on a basic scatterplot, we need to figure out which motivations to use for our axes.

One approach is to just pick the 2 motivations on which the games vary the most on to try to maximize the differences in the scatterplot. In our case, these 2 motivations turn out to be Story (elaborate narrative, interesting characters) and Design (expression, customization). The plot shows that overall, there’s a positive correlation between Story and Design. Open World games with elaborate narratives tend to provide more customization options. Games like Dragon Age maximize both, whereas games like Grand Theft Auto don’t really emphasize either narrative or customization. Uncharted is an interesting outlier–it has a moderately complex narrative, but has comparatively few customization options.

But because the two axes are so correlated, this particular graph isn’t really giving us a good spread of the genre.

2nd Attempt: Pick the 2 Motivations that are Most Conceptually Meaningful

Another way of going about this is to pick the 2 motivations that we think most differentiate gameplay in this genre. Last week, we had a blog post about the preference for exploration vs. campaign completion in Open World games. So we might pick Story (elaborate narrative, interesting characters) and Discovery (explore, tinker, experiment) as the two axes. 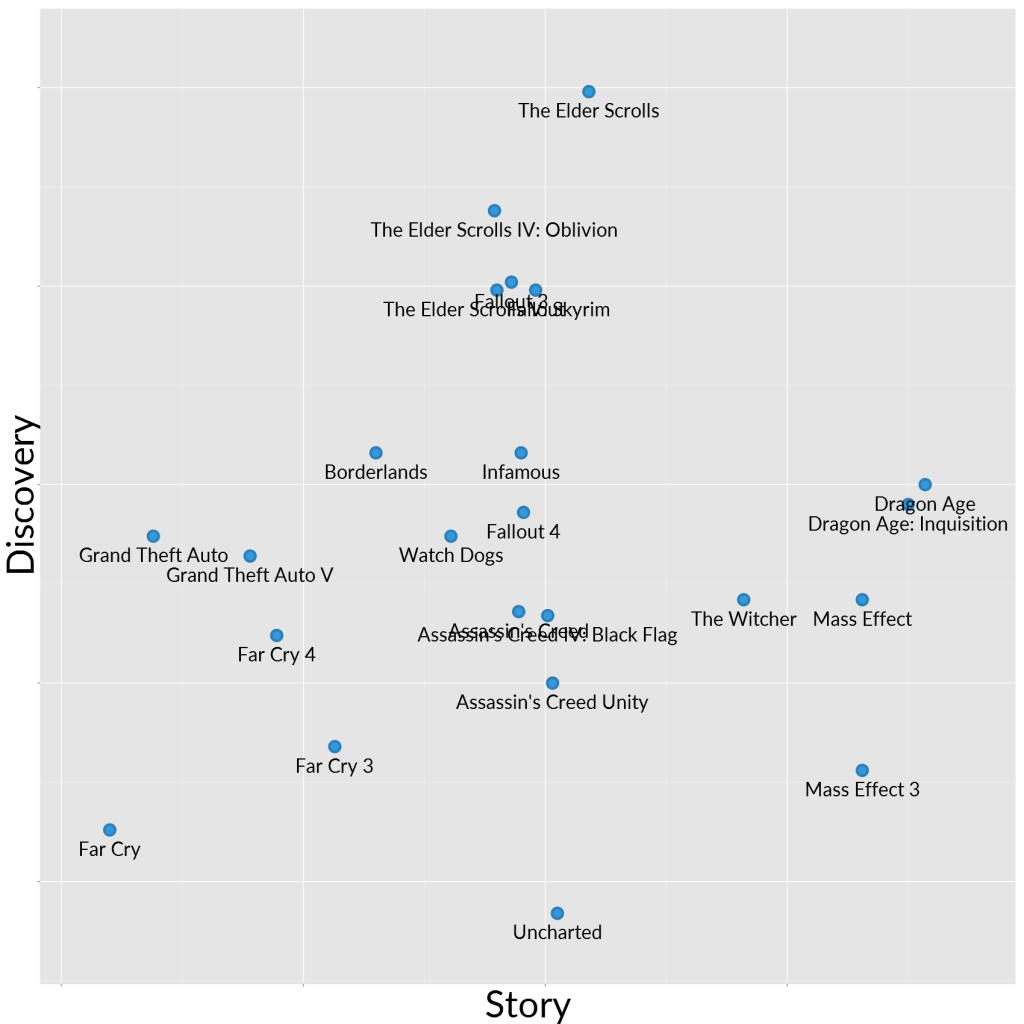 Now, we’ve got a much better spread across the map. And it’s clearer that the major game studios are clustered in different parts of the map. The Bioware games (Dragon Age and Mass Effect) emphasize narrative and characters while the Bethesda games (Fallout and The Elder Scrolls) emphasize open exploration and tinkering. Uncharted, with a more linear narrative structure, scores comparatively lower on Discovery.

The major game studios are clustered in different parts of the map.

This conceptually-driven method allowed us to pick better axes, but with 12 motivations, there are 66 unique combinations out there, so we need a more reliable way of figuring out the best visualization.

Ideally, we want a repeatable process that maximizes the unique variance covered by each axis, and allows us to visualize more than 2 motivations at a time on a 2D map. Fortunately for us, there’s a statistical method to do just that.

And it’s the same method we used to identify the motivations in our model in the first place. We can use factor analysis to identify the 2 primary axes that maximize the variance across these game titles. These axes are created by aggregating highly related motivations, such that the resulting 2D map surfaces the relationships between a much larger number of motivations. Let’s unpack these new axes one at a time, starting with the x-axis. The factor analysis found that, among Open World games, Story is strongly negatively correlated with Power (leveling up, getting powerful gear), Challenge (practice, high difficulty), and Competition (matches, high ranking). In fact, this relationship is so strong that it can be considered its own spectrum. On the left of the spectrum are the games that emphasize power accumulation and skill-based mastery (and don’t emphasize elaborate narratives), while on the right are the games that emphasize interesting stories and characters (and place less emphasis on accumulating power and difficult missions).

Now, let’s turn to the y-axis. The factor analysis found that Excitement (fast-paced action, thrills) and Destruction (guns, mayhem) were strongly negatively correlated with Design (expression, customization), Fantasy (being someone else, somewhere else), and Discovery (explore, tinker, experiment). Thus, games on the lower end of the axis emphasize fast-paced mayhem (rather than customization and exploration), while games at the upper end of the axis emphasize discovery and immersion (rather than guns and thrills).

The factor analysis packed a lot into our axes, but in surfacing these two underlying spectrums in the Open World genre, it is essentially letting us see how these games vary across 9 motivations all at the same time.

The richness of the axes also hints at the four interesting quadrants in this map. Open Mayhem: These games focus on fast-paced mayhem and explosions without a narrative boxing you in. Instead, there’s an emphasis on amassing power (stronger character/gear) and taking on challenging missions and tasks that take time to practice and master.

Action-Packed Narrative: These games feature thrilling action in the form of a structured narrative. While these are Open World games, the core gameplay revolves more around the linear “set pieces” rather than exploring the world.

Deep Story: These games have elaborate narratives and a wide cast of characters with different personalities and interesting backstories you can interact with. The gameplay pacing is slower, and there’s a strong emphasis on character customization, open exploration, and a rich alternate world.

Immersive Challenge: These games also give players a rich alternate world to explore with plenty of customization options, but instead of delving into a deep narrative and character relationships, the core gameplay emphasizes leveling up and accumulating power (think min-maxing) to take on challenging missions and tasks.

A Note on Overlap Between Game Audiences

Some of the dots from the same franchise are incredibly close to each other. So it’s a fair question to ask whether this is simply an artifact of the same gamers listing both games in the survey.

Our attempts at mapping out the Open World genre led us to identify a 4 quadrant segmentation. Not only do the games cluster by game studio, these clusters also tend to fall into their own quadrants–the split between the Assassin’s Creed franchise and the recent AC titles is an interesting exception. In a way, the map is highlighting how different game studios have specialized within the genre space, and the game features and gameplay they prioritize. Each of the major studios has carved out their own section of the map to play in.

The map is highlighting how different game studios have specialized within the genre space.

Your Thoughts on the Level of Detail

We have a broad audience in mind for our blog posts, and with data like this, it can be difficult to gauge whether the explanation of the methods is interesting or if it makes the content too hard to follow. Let us know your thoughts in the comments below!