The following findings are based on data from 107,100 gamers who have taken the Gamer Motivation Profile since late June.

We’ll first focus on gamers from the US (n = 51,283). The chart below plots the gender means across the 12 gaming motivations measured by the Gamer Motivation Profile. The y-axis represents z-scores (standardized scores with a mean of 0 and a standard deviation of 1). 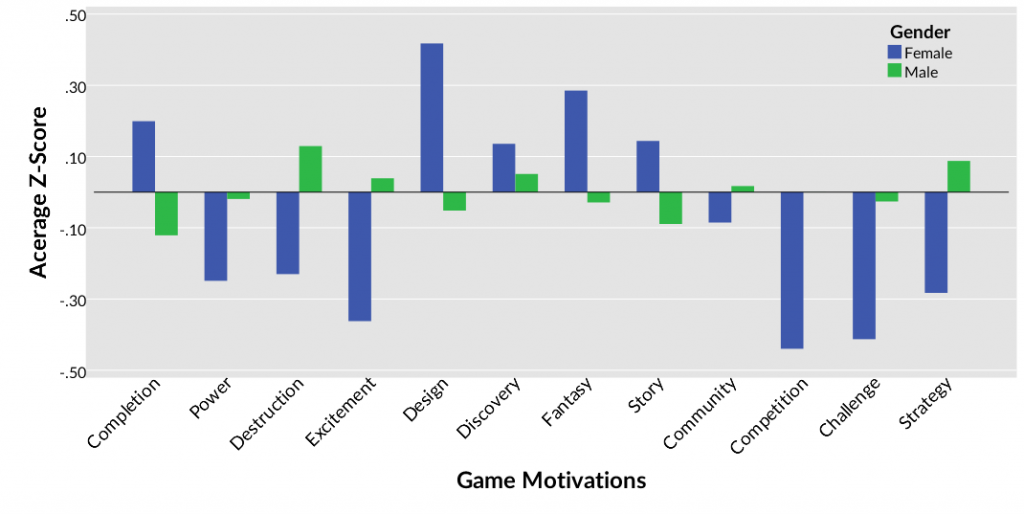 In sufficiently large data sets (such as ours), all group comparisons become statistically significant as even tiny differences become detectable. In these cases, research scientists often use effect size measures to quantify how strongly two variables are related to each other. In our data, the strongest gender difference in Competition has an effect size of d = .33 (or an r = .16), suggesting an overlap proportion of 87% between men and women on this motivation. It bears keeping in mind that deciding whether an effect is substantively meaningful is more often a social rather than scientific question. For example, an 87% overlap suggests a small difference but may be large enough to trigger a marketing feedback loop that gradually skews the demographics of acquired customers.

Putting Age in the Picture

In our case, there is a way we can understand the effect size of gender in a more holistic context. We can compare the effect of gender against other variables in our data set. Let’s consider Competition again, the motivation with the largest gender difference. When we plot gender and age against Competition, we see a different side of the story. 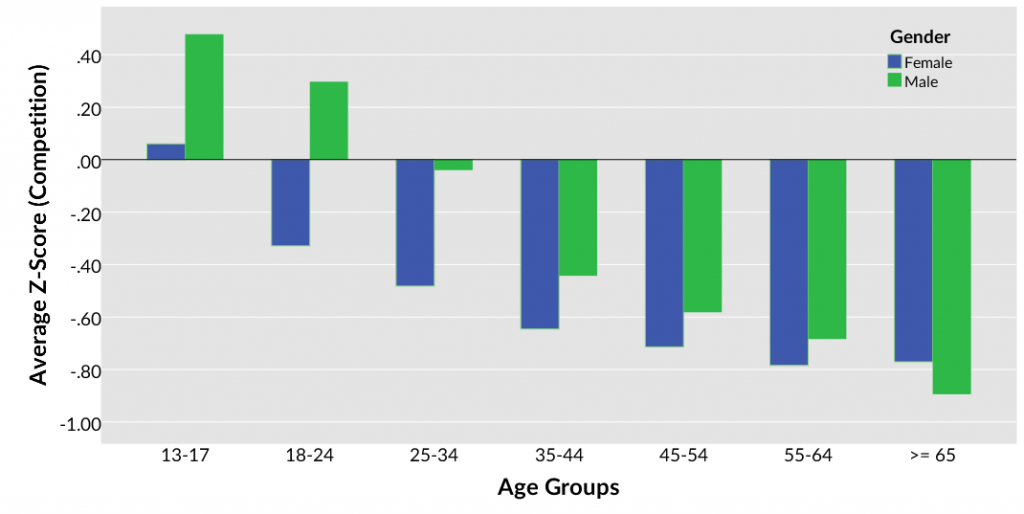 If we’re only considering people under the age of 34, then yes, there is a consistent difference in Competition between male and female gamers, but if we look further out, we see that the gender difference largely disappears with age.

And if we focus on the 13-17 group, we find that the difference between the male and female gamers is in fact much smaller than the difference between the youngest and oldest male gamers. The correlation between age and Competition is r = .28. Since r-squared is the amount of variance explained, this means that age explains 3 times the observed variation in Competition compared with gender.

When we re-ran the analysis on the full data sample, we found the same trends and effects.

The ESA reported in their 2015 factsheet that the average female gamer is 8 years older than the average male gamer. This suggests that pure gender comparisons among gamers artificially inflate perceived gender differences if they do not account for the underlying effect of age.

In the gaming industry and gaming community, we talk a lot about differences between male and female gamers, and what games for women might look like. The data here suggests that what we should really be paying attention to is age. After all, younger and older gamers are far more different in terms of motivation than male and female gamers. And even in the motivation with the largest gender difference, there is still an 87% overlap between what men and women enjoy.

Below we list the correlations of age with all 12 gaming motivations.

Is it odd that all the correlations are negative? Yes and no. On the one hand, the direction of correlations is an arbitrary artifact of how the motivations are keyed (i.e., whether agree or disagree is coded 1 vs. 5). But on the other hand, a high score does consistently mean more interest in a particular kind of gameplay.

We think two things are happening. One is that older gamers are genuinely less motivated by certain forms of gameplay, such as highly competitive or adrenaline-filled games. But second, and perhaps more importantly, low scores also describe equally valid forms of play. Older gamers likely have less disposable time and this may reduce their interest in highly social activities that require setting time aside (e.g., raiding in MMOs). This doesn’t mean they don’t like games; this just means they want games that can fit into their schedules. Not wanting high amounts of social interaction isn’t a lack of motivation; solo independent play is an equally valid gameplay motivation. And finally, constraints on disposable time and establishing a family and career may indeed have a mild dampening effect on the relative importance of gameplay motivations overall.

While only a small percentage of respondents identified as non-binary (0.9% in the US sample), our large sample meant that a fair number (n = 464) participated in the survey. They primarily identified as agender, genderfluid, genderqueer, transgender, and non-binary (in that order of frequency).

To be perfectly honest, we weren’t sure how to analyze non-binary gender because it isn’t a monolithic category and the identity politics behind each term is complex—e.g., should trans and genderqueer folks be grouped together?

As a preliminary analysis, we decided to analyze all non-binary responses as a single category. We found that as a whole, the non-binary responses largely mirrored that of the female gamers. One consistent and pronounced difference though was the higher scores across all the Immersion and Creativity motivations (Design, Discovery, Fantasy, and Story). 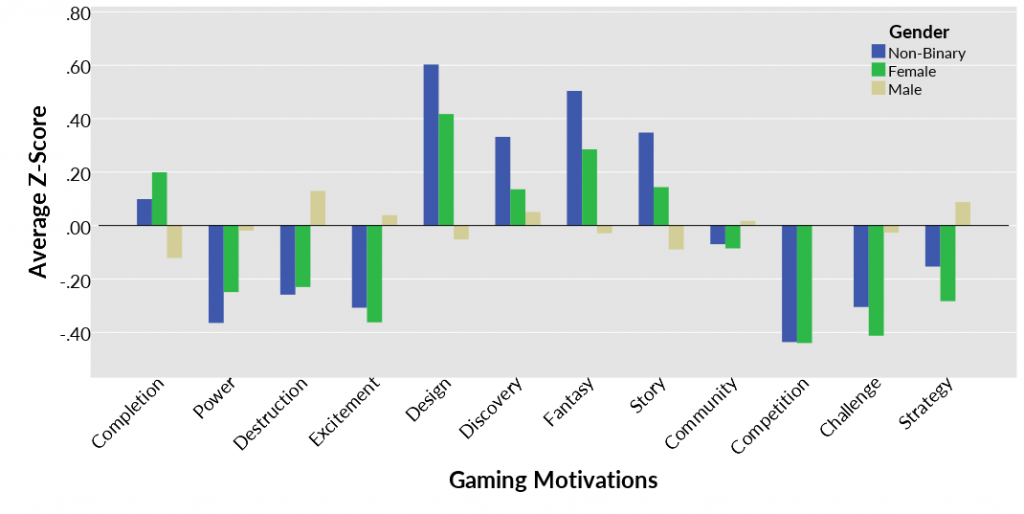 We plan to regularly blog about findings from this large data set. In future posts, we’ll touch on regional differences and how we’re able to create audience profiles for specific game titles.

Participate in our Survey Research

If you’re a gamer, take a few minutes to participate in our ongoing surveys to help us explore the psychology of gamers. Your responses help us create new profile tools and blog findings.