When we started developing the Gamer Motivation Profile, we wanted to make sure we had a way of debugging any potential issues with the motivation scores. So as a reference point, we asked gamers to list their favorite video games (up to 3). The data we received from over 100,000 gamers allowed us to do much more with the game title information than we expected.

Tapping into the Game Title Data

In an earlier post, we described how the data allowed us to identify the most popular games for each of the different motivations. We were surprised that the results surfaced niche titles in many genres (e.g., a grand strategy games like Europa Universalis) as well as fairly recent games (e.g., Heroes of the Storm). The breadth and sheer scale of the data then made us wonder if we could flip this question around. Since we had data points for so many game titles, we could target specific games and profile the demographics and motivations of that game’s audience.

Here’s how we created these game audience profiles: We used fuzzy string matching to identify the gamers who listed a specific game title and its variants (e.g., Civ 5 = Civilization V). We then compared this selected group of gamers against the full sample in terms of their demographics and motivation scores.

We could target specific games and profile the demographics and motivations of that game’s audience.

Let’s start with a well-known and popular game: Minecraft. Compared with the average gamer in our sample, there is a slightly higher proportion of female gamers in Minecraft. In terms of motivation, Minecraft users score high on Discovery (experimenting and exploring) and Community (interaction and teams), and low on Excitement (fast-paced and intense) and Story (scripted narrative and characters). Other games they enjoy also reflect a high amount of calm sandbox tinkering, such as Kerbal Space Program, Don’t Starve, and The Sims. 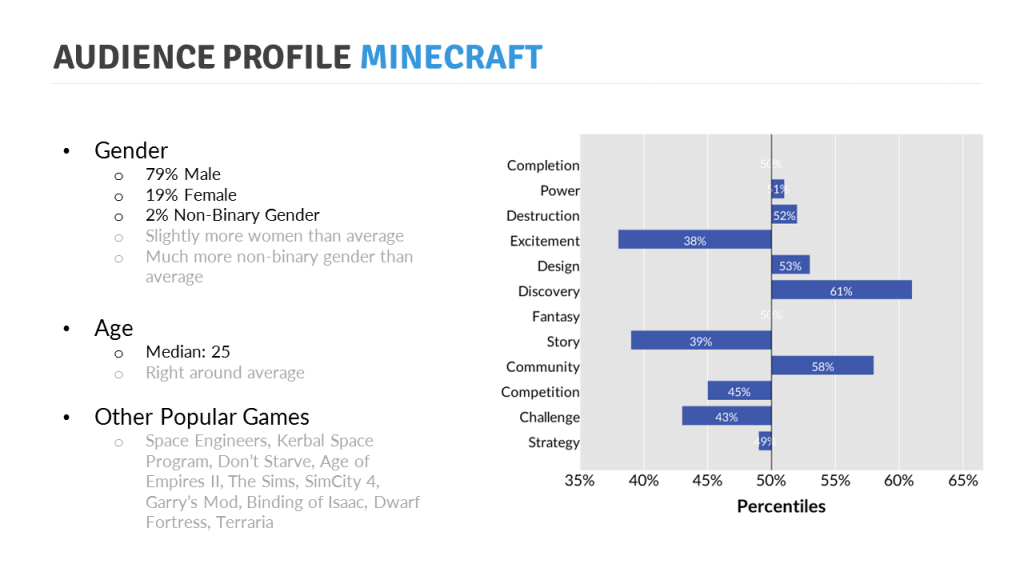 To illustrate the variation in the profiles, we then picked 4 very different games in terms of genre, platform, and player base size. First up is the PC grand strategy game Europa Universalis IV. The audience of EU IV is almost entirely male. They score very high on Strategy (thinking and planning) and very low on Excitement (fast-paced and intense). Other games they enjoy also encourage taking the time to think and plan out long-term strategies, such as Age of Wonders, Cities: Skylines, and the Civilization series. 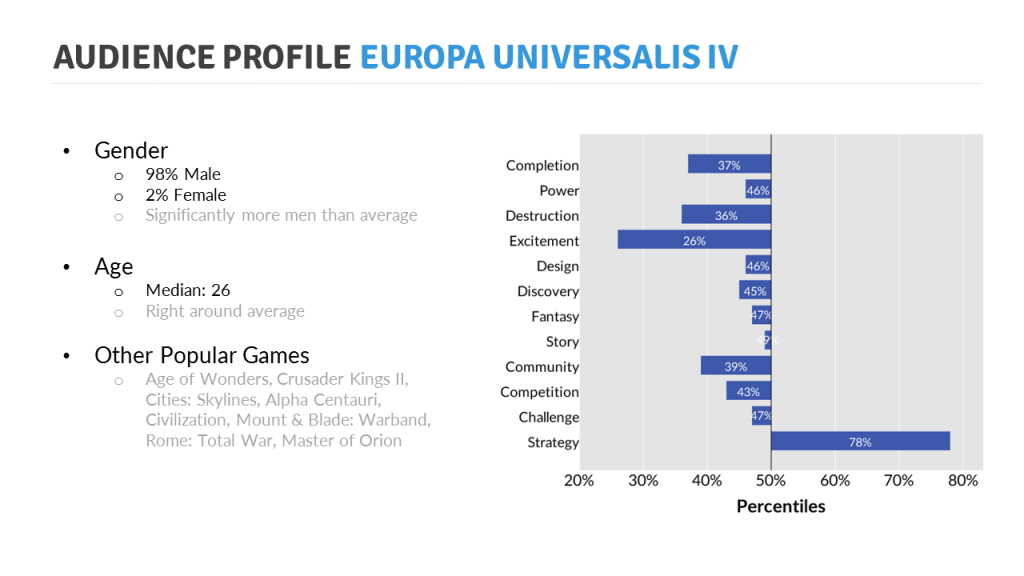 Candy Crush is a casual browser/mobile Match 3 game. The audience of Candy Crush consists mostly of female gamers and also much older gamers than the average in our sample. These gamers scored high on Completion (collecting and finishing everything) and very low on almost every other motivation factor. The pool of other games they listed was too disparate to identify stable commonalities. 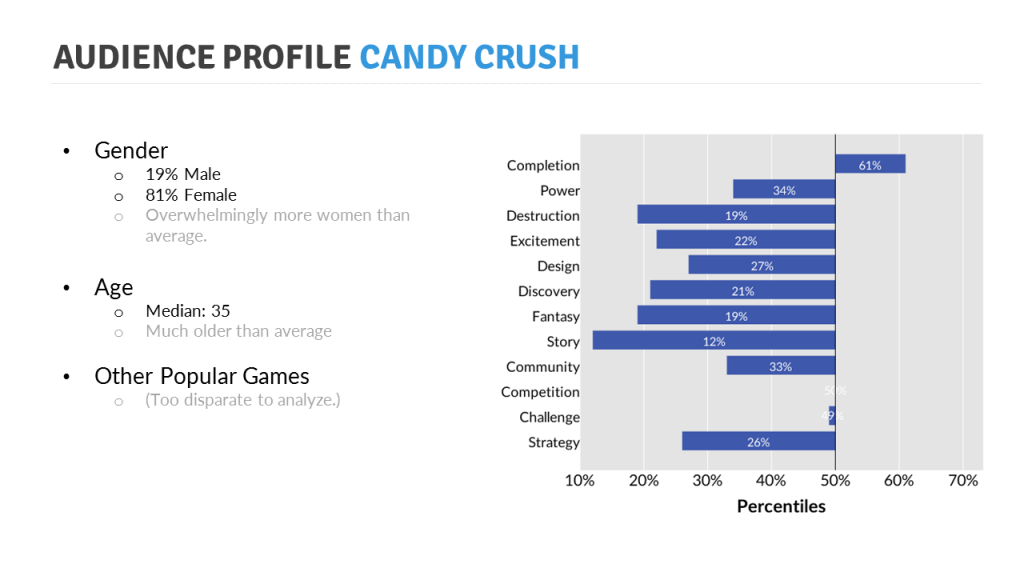 Crash Bandicoot is a console platformer. Their audience consists of slightly more women than our sample average, and their age is slightly younger than average. In terms of motivation, they scored high on Completion (collecting and finishing everything) and Excitement (fast-paced and intense). They scored slightly lower than average on Strategy. Apart from other platformers that feature cartoon animals such as Jak & Daxter or Spyro the Dragon, it was interesting to see Pokemon Silver appear due to the interest in Completion (i.e, the collection mentality). 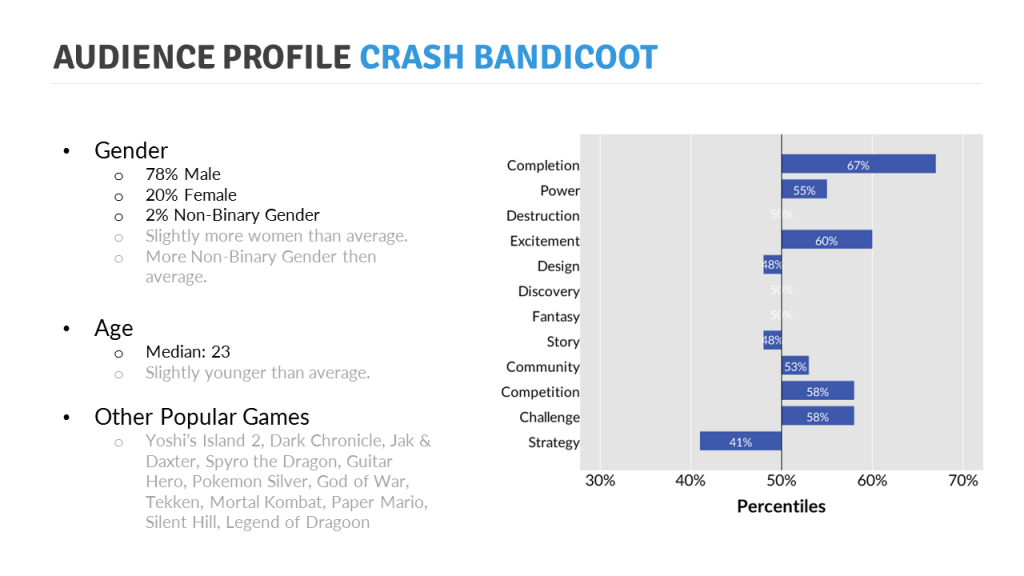 Our final example is Second Life, an online virtual world sandbox. The game audience is almost exactly equal in terms of male and female gamers, with a high proportion of non-binary gender gamers relative to the full sample. Their age was also much higher than average. In terms of motivations, they scored high in Design (expression and customization) and Community (interaction and grouping up), and very low on Excitement (fast-paced and intense), Destruction (explosions and mayhem), and Power (becoming as powerful as possible). Other games they enjoy include a mix of MMOs and sandbox games that feature a design element, such as The Sims and Minecraft.

The similarity and audience overlap of different games can now be quantified using the distance between the motivation profiles.

We also now have all the underlying math in place to provide tailored game recommendations to gamers based on their motivation scores. We can find the 1000 nearest neighbors to a specific gamer and tabulate the most popular games mentioned in that pool. We are working on adding this functionality to the Gamer Motivation Profile.