We’re revisiting the Strategy genre map with some additional data overlays. If you’re a regular reader of our blog and familiar with our motivation data and how we generate these genre maps, feel free to skip the next 2 sections.

Our working assumption is that the core audience a game manages to attract provides the best proxy score for the game as a whole. A game with a good elaborate narrative will generally attract gamers who are interested in elaborate narratives. And a game might try to do many things at once, but its core audience will reveal whether only certain aspects of the game were playable and appealing. Certainly, the top 1% most hardcore gamers of any game (on any dimension) will play it in a dramatically different way from everyone else, but we would argue that a game’s core audience is most representative of what a game is about.

For our Strategy genre map, we started with Civilization and StarCraft as the seeds, and then we used our data to identify the games most frequently mentioned by players who enjoyed one of these two franchises. The result was a list of game franchises (e.g., Europa Universalis) and game titles (e.g, League of Legends).

We first plotted out this Strategy genre map back in January. The data underlying the current map is different in 2 ways. First, we now have data from over 220,000 gamers (compared with 140,000 in January). And second, we’re plotting data from our full data set (compared with the January map that only included North America and EU gamers).

Along the x-axis is Strategy (the appeal of thinking, planning ahead, and making complex decisions). And along the y-axis is Excitement (the appeal of fast-paced gameplay with lots of thrills and surprises). Here’s a handy reference chart for all 12 motivations we measure in our model.

Keep in mind that we’ve “zoomed in” on the Strategy corner of a much larger game space. In other words, there is a lot of empty space that has been cropped out on the lower end of Strategy. The positioning of games on this map is all relative to the Strategy genre.

Keep in mind that we’ve “zoomed in” on the Strategy corner of a much larger game space.

Compared with our earlier map, the positioning of games is largely consistent. We see the 4X and Grand Strategy games in the lower right corner of the map, the old-school RTS games in the middle of the map, and the fast-paced MOBAs in the upper left corner. In case you’re wondering why Counter-Strike is in this map at all, it got dragged in via StarCraft as one of the seeds. We decided to keep it because it’s a good anchor for that upper left corner of the map.

The Cognitive Threshold in Strategy Games

We’ve previously described and discussed the implied cognitive threshold in this genre map, so we won’t go over it again here except only to show the estimated threshold on this revised map. 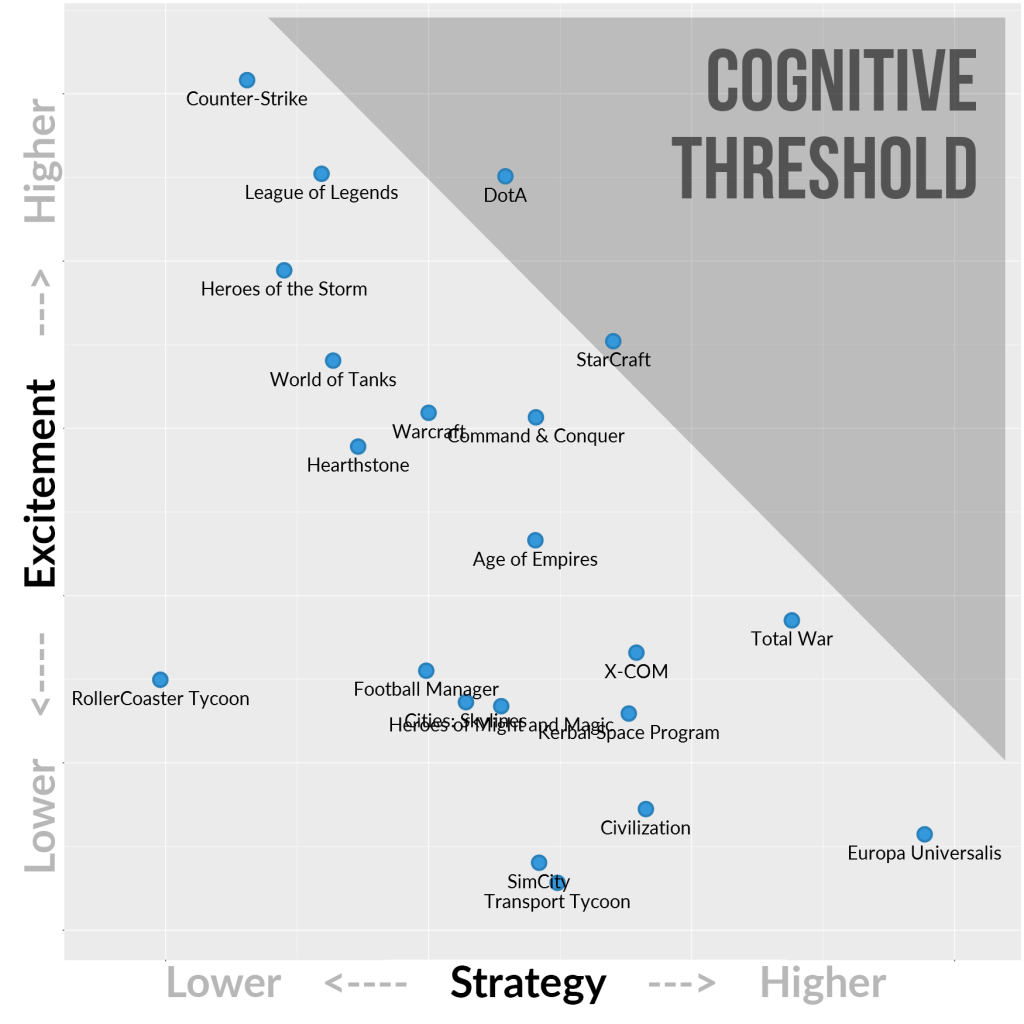 The Faster-Paced the Game, The Younger the Audience

Onwards with the data overlays. We’re going to take this Strategy genre map, and overlay a variety of different variables on top of it. First up is age. For each game audience, we also have their demographic data via the surveys. In the chart below, we’re overlaying the median age of each game’s audience as the color of each dot. 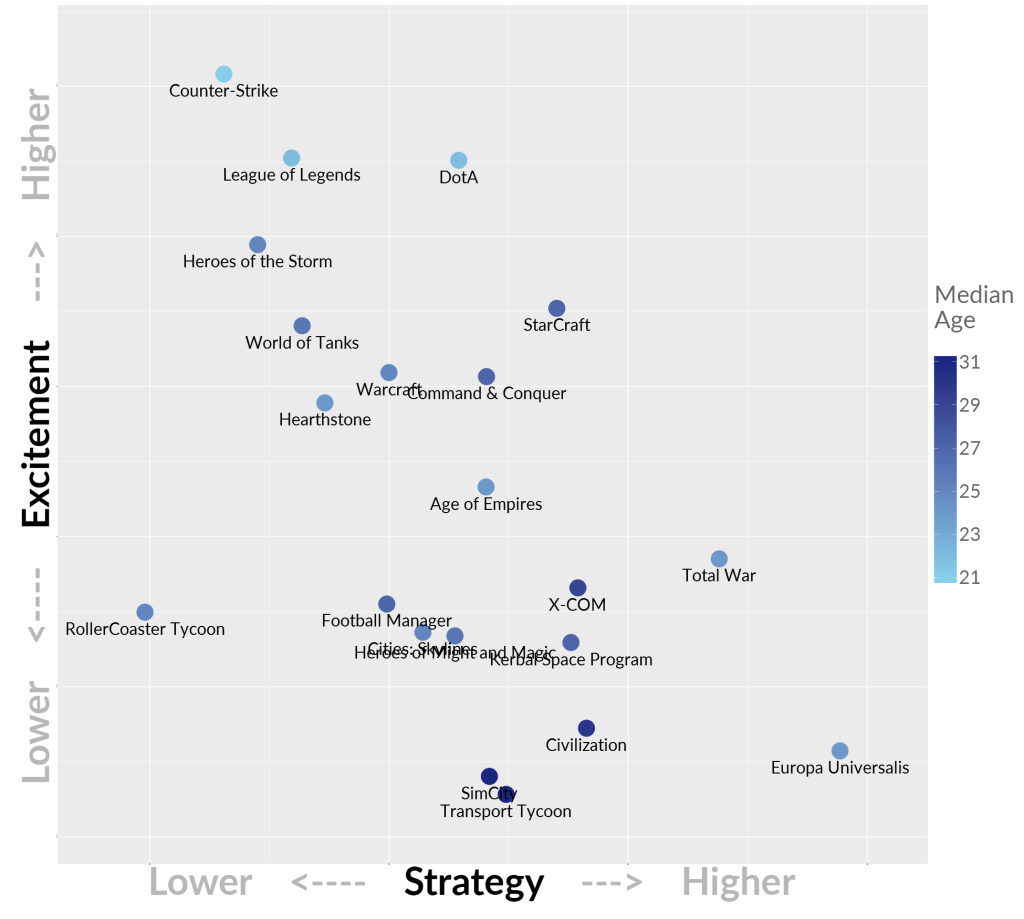 One overall trend is that the lighter dots tend to be in the upper portion of the map, and the dots tend to darken as you move downwards. It turns out that within this Strategy genre space, a game’s Excitement score is strongly negatively correlated with its median age (r = -.70). Europa Universalis is a noticeable outlier. Given its low Excitement score, it ought to have a much older audience, but its median age is slightly below average.

A game’s Excitement score is strongly negatively correlated with its median age.

Gender Did Not Align with Either Axis

Our next overlay is the % of each audience that identified as male. We did provide a non-binary response option in the survey, but only ~1% of respondents checked the non-binary option, and thus even in games with a sample size of ~1000, the variance is too high to be reliable. 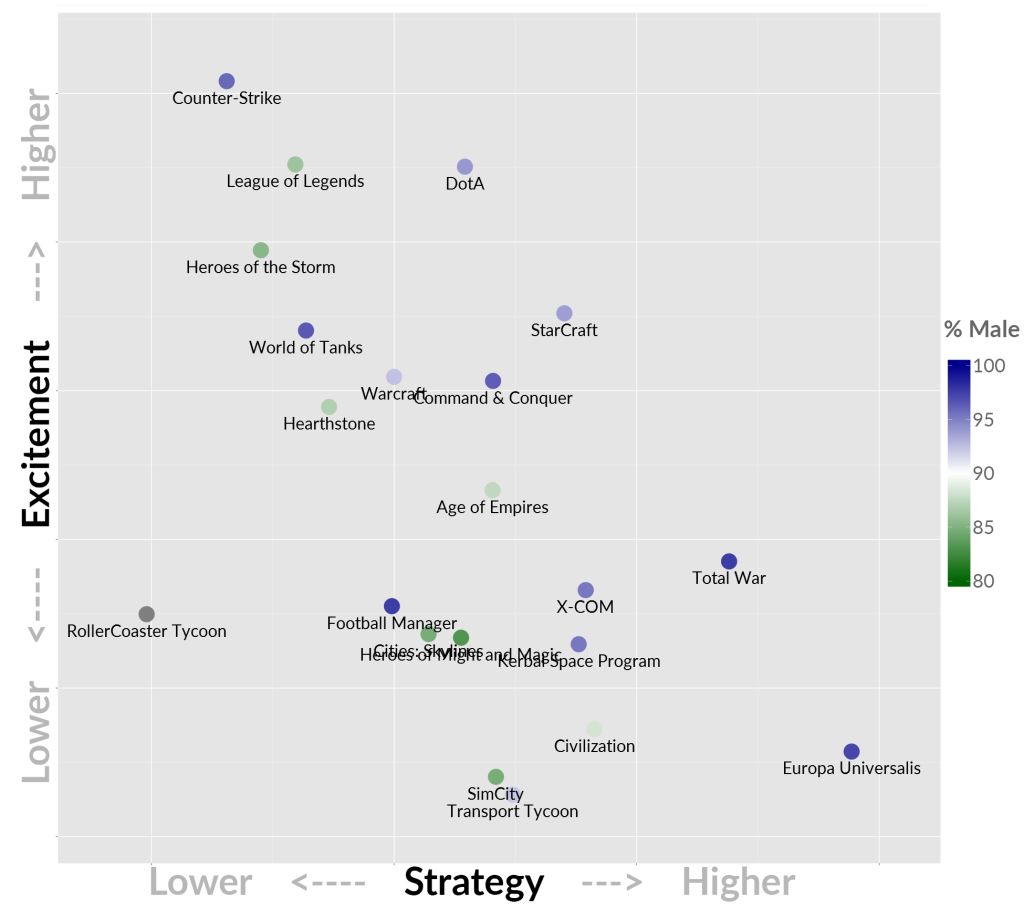 One note on RollerCoaster Tycoon. It was an outlier in terms of % male (at 72%). To avoid having this one dot skew the color gradient, we excluded it from the gradient (and thus, it’s gray in the chart).

We didn’t see any obvious trends with this data overlay. The games with the highest % of male gamers (Football Manager, Total War, and Europa Universalis) are in roughly the same area as the games with the highest % of female gamers (RollerCoaster Tycoon, Heroes of Might and Magic, and Cities: Skylines). One possible explanation is that the spread we’re seeing is more an artifact of marketing/game culture rather than inherent motivational appeal of these games.

In addition to median age, we also looked at the standard deviation of age for each game audience. This provides a sense of the age range that a game is able to appeal to. 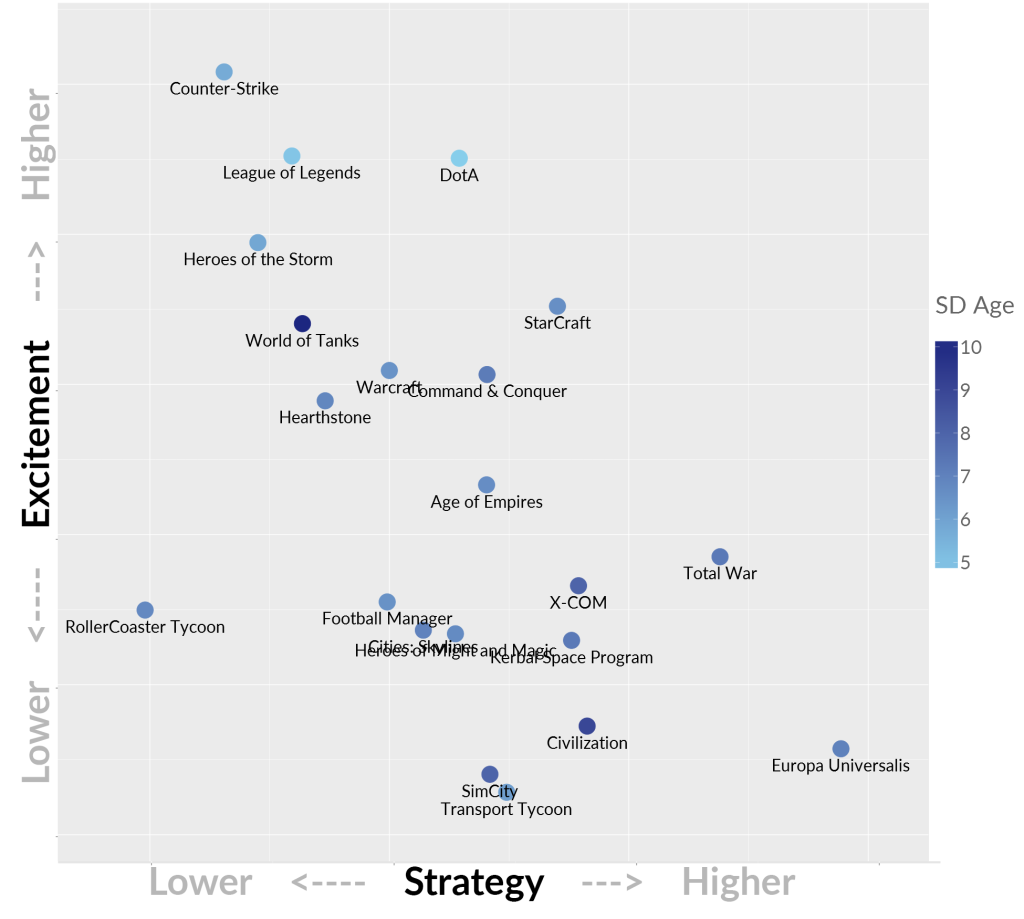 Dots that are lighter blue appeal to a narrower age range, while darker blue dots appeal to a broader age range. The clear outlier in this chart is World of Tanks. Given the area of the map it is located in, we would have expected a youngish audience with a relatively narrow age appeal. Instead, it has the broadest age appeal of any game in our genre map (with a standard deviation of 10.3).

The clear outlier in this chart is World of Tanks.

The Lasso Effect of Deep Strategy 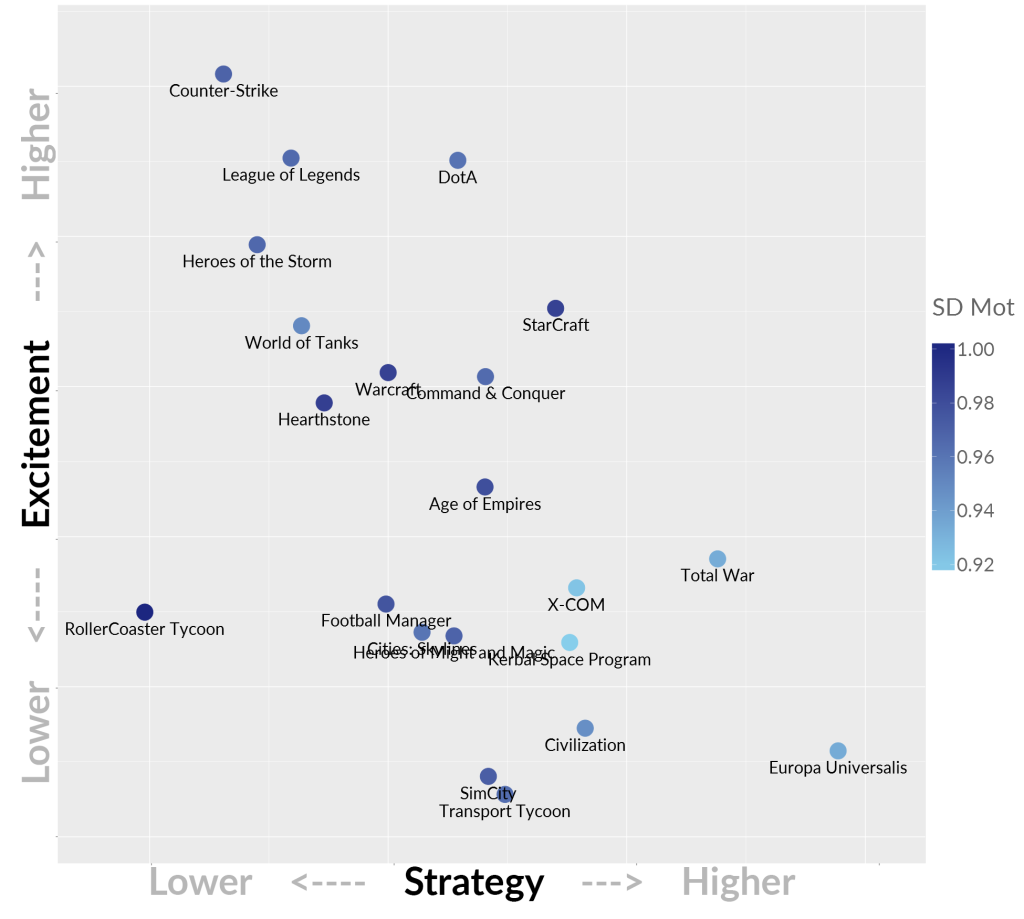 There are 2 major trends in this map. First, games along the rising diagonal (where the pacing of the game matches its strategic complexity) tend to have more varied audiences. And second, games that score high on Strategy tend to have far more homogenous audiences and attract gamers with very similar motivation profiles.

Notice that high Excitement doesn’t have this “lasso” effect. Games with high Excitement don’t limit motivation profiles to the extent that high Strategy does. This implies that beyond a certain Strategic complexity, games begin to only appeal to a very specific kind of gamer (that don’t vary much even on other motivation factors).

The game with the most homogenous audience was Kerbal Space Program. I was surprised at this (Nic Ducheneaut was not surprised). I always assumed there was a sizeable cohort of gamers who played KSP as an open sandbox, but the data suggests that a strategic campaign approach is the dominant playstyle for KSP.

Did You Spot Something in These Maps That We Didn’t?

Nic and I spent some time yesterday looking over these maps in the office, but leave us a comment if you spot any interesting patterns or trends that we may not have picked up on.

Leave a comment if you spot any other interesting trends or patterns in the map overlays.