In mid-April, we got an email query from Eric Jordan, the CEO of Codename Entertainment. Codename makes an Idle Clicker game called Crusaders of the Lost Idols and because the genre is still relatively new, Eric wanted to learn more about the psychological profile of these gamers.

At this point in time, Nic Ducheneaut and I had never played an Idle Clicker game, but we did have data for some titles from our Gamer Motivation Profile. This is where our story begins.

But First, What’s an Idle Clicker?

Idle Clickers are a fairly new game genre. They typically have a minimalist approach, where game mechanics have been distilled into their most basic form. As the name implies, Idle Clickers are somewhat of an oxymoron that combine two seemingly opposite mechanics.

Idle Clickers are somewhat of an oxymoron that combine two seemingly opposite mechanics.

On the one hand, Idle Clickers start by having you feverishly clicking away to make money via lemonade stands (e.g., AdVenture Capitalist) or gain xp from killing monsters (e.g., Clicker Heroes, Crusaders of the Lost Idols). As you level up, you gain access to upgrades and level-ups that open up more powerful abilities or heroes. But at the same time, Idle Clickers also allow you to automate all this clicking via hired managers or auto-farming modes. Idle Clickers eventually play themselves, and they accumulate cash/xp for you even when you are offline.

Idle Clickers are descendants of two games that were designed to poke fun at existing game mechanics. They weren’t actually designed to be fun, but turned out to be surprisingly enjoyable.

Idle Clickers are the descendants of two games that were designed to poke fun at existing game mechanics.

Following the success of MMOs like EverQuest, Eric Fredericksen created Progress Quest to parody the monotony of leveling-up and grinding by having the game play itself. You create a starting character and the game is automated from that point on.

Then during the Facebook gaming boom, Ian Bogost created Cow Clicker as satire—you clicked on a cow once every 6 hours, it mooed, and your click tally increased by 1. That was essentially the entire game. 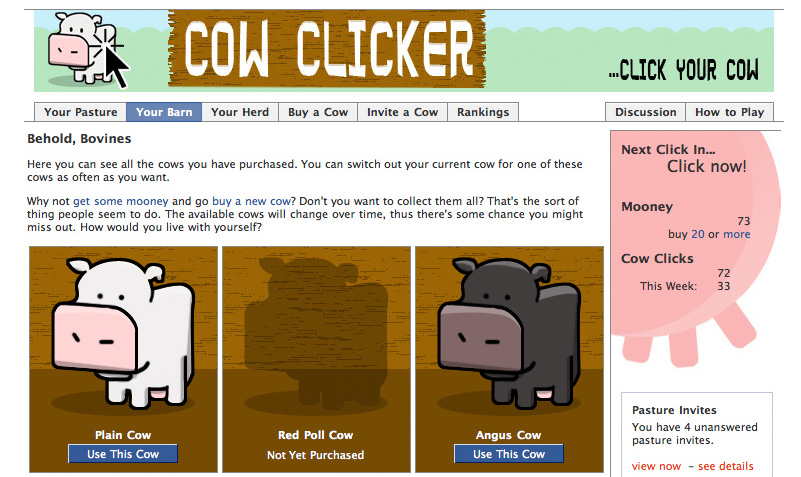 Both games had an unexpected following. Then Cookie Clicker came along and merged the clicking and idle mechanics, and threw exponential growth and optimization into the mix. Gamers are in charge of making cookies, first with clicks, and then with automated managers that quickly ramp up cookie production. All modern Idle Clickers are descended from Cookie Clicker.

We Expected Casual Gamers. But That’s Not What We Found.

When Nic and I sat down to generate the audience reports of Idle Clickers for Eric, we had this image of casual Facebook games and simplistic, repetitive clicking in our minds. So our expectation was that Idle Clickers appealed primarily to casual gamers.

But that’s not what the data showed at all. Not for Clicker Heroes. Not for AdVenture Capitalist. And not for Crusaders of the Lost Idols. Nic and I were so taken aback by this that we thought we had uncovered a bug in the data processing. But after a deep dive, all the data integrity checks came out clean.

Among the games that are disproportionately popular among these gamers, we were surprised to see core RPG titles like Diablo III and Fallout 4, as well as MMOs such as The Elder Scrolls Online and even EVE Online.

We then looked at how this audience scored on our 12 gamer motivations. The motivation profiles for all 3 Idle Clicker audiences were consistent: most driven by Completion (collect stars, complete all missions) and Power (leveling up, getting powerful gear), and least driven by Excitement (fast-paced, thrilling, surprises) and Fantasy (being someone else, somewhere else).

Eric helped us make sense of this audience data, and explained why this profile aligned with his intuition. Even though many people assume that Idle Clickers attract very casual gamers, Eric pointed out that all 3 games are in the top 2% most played on Steam, and Steam is far from being a casual platform.

If you’re unfamiliar with Idle Clickers, you (like Nic and I) might be surprised to see where Clicker Heroes falls in terms of Steam’s most played games. The chart snippet below was taken from Steamcharts. Clicker Heroes is only a few ranks below Fallout 4 and Warframe, and ahead of games like DayZ and Counter-Strike.

And it slowly dawned on us that Idle Clickers attract core gamers (especially core RPG gamers) because they cleanly isolate the power progression and accumulation mechanics from the typical trappings of AAA RPGs. These are the gamers who enjoy the leveling up and power accumulation in RPGs, but less interested in big-action combat or elaborate fantasy settings that often come bundled together in an RPG.

Imagine if the Achievers in MMOs were allowed to strip away all the game mechanics and elements they saw as secondary. Idle Clickers are probably very close to what they would end up with. And that achievement-driven, min-maxing mentality is very much a core gamer mentality.

Putting It to the Test

Because Idle Clickers are still a fairly new genre and they overlap with casual social gaming mechanics, game developers have had trouble figuring out what drives these gamers. Now that Eric had an empirical motivation profile of these gamers, he decided to put it to the test.

He had Codename’s marketing department perform an A/B test with their player acquisition. In one version of the test, he used the game’s existing tagline. In the second version, using roughly the same number of words and sentence structure, he aligned the tagline with the key motivations we had identified. Then they released the marketing campaign, and gamers randomly saw one of the two taglines.

Codename ran an A/B test with their player acquisition.

Codename measured the click-through rate (CTR) of their campaign—the % of gamers who clicked on the ad after seeing it—and found that the revised tagline performed significantly better than the original, with a mid-double-digit improvement.

Less Can Be More

Idle Clickers are a good reminder that established game genres may nevertheless be bundling together orthogonal gaming motivations, ripe for deconstruction and mashups. As an Achievement-oriented gamer myself, I’ve always loved the progression mechanics in RPGs, but rarely have the patience for elaborate narratives and characters—I just want to get back to leveling up, please.

See how you compare with other gamers. Take a 5 minute survey and get your Gamer Motivation Profile.