Beyond 50/50: Breaking Down The Percentage of Female Gamers by Genre

You’ve probably heard the often-quoted statistic that about half of video gamers are women, illustrating how gaming is now a mainstream activity enjoyed by both men and women. This finding comes from the yearly ESA report, and has fluctuated between 38% and 48% in the past decade—currently estimated at 41% in the 2016 report.

Oddly, this statistic can have the exact opposite intended effect. Some gamers argue that the study bundles gamers across platforms and genres, and is thus unrepresentative of the “real” PC/console gamers. Or that the apparent gender parity means there are no longer gender biases in game design.  A game dev we recently chatted with mentioned that some designers she works with still assume that only 5% of core gamers are women, and that the quoted 41% of women are primarily casual gamers.

This statistic can have the exact opposite intended effect.

By bundling across platforms and genres, this 41% statistic doesn’t surface how the percentage of female gamers does or does not vary across genres, or how large that variance is. Using survey data from over 270,000 gamers on the specific game titles they enjoy playing, we’ve put together some findings on the percentage of gamers in different genres that are female.

The Gamer Motivation Profile allows gamers to take a 5-minute survey to get a personalized report of their gaming motivations, and see how they compare with other gamers. Over 270,000 gamers worldwide have taken this survey. The 12 motivations that are measured in our model were identified via statistical analysis of how gaming motivations cluster together.

Alongside gaming motivations, we also collect data on demographic variables. In our full sample, 18.5% are female gamers. We also ask gamers to list specific game titles/franchises that they enjoy playing (up to 9). By sampling gamers who mention a specific game title/franchise, we can generate a profile of that game’s engaged audience. Note that the data we have is limited to the favorite games listed by a gamer–they are likely playing more games than they are able to list, but this constraint holds true for all respondents in our data, whether male or female.

Notes on Disparity Between 41% Female Gamers in ESA Report vs. 18.5% in Our Sample

The delta between the ESA’s estimated 41% female gamers and our 18.5% is important, but how it impacts the data depends on your interpretation of the cause of that delta. The ESA worked with Ipsos to survey 4,000 US households, but they don’t provide any details on their sampling methods (e.g., phone or web survey?) or who got counted as a gamer–e.g., if playing Solitaire last year counts.

What we do know is their sample has a large proportion of casual gamers. In their 2015 report, their most frequent gamers are most likely to be playing social games (31%) and puzzle games (30%). Note that this is their “most frequent” gamers. We can assume that their less frequent gamers are even more likely to play casual titles. So a large portion of their sample may not regularly play AAA titles at all.

Our sample is biased towards core gamers–people who would click on something labeled a Gamer Motivation Profile. But when we’re drilling down to a specific game (like Diablo III in the Action RPG genre), the 41% in the ESA sample is not a meaningful benchmark because a large portion of that sample was likely not playing a AAA game to begin with.

The self-selected sampling is very much a limitation of the methodology, so we do try to make it clear how we collected the data to allow readers to interpret the findings in the proper context.

There are a lot of seemingly basic questions in gaming that we don’t have data for. For example, it’s strange that we don’t know the gender base rates of AAA genres. This is a reflection of how hard it is to sample gamers. In other established domains, we could apply weights afterwards to balance samples, but in gaming, no one knows the gender weights to apply for specific genres. And how would anyone sample a truly representative pool of Shooter gamers (for example) to begin with? So a big part behind our decision to publish this data was to start this conversation–“Here’s our methods. Here’s the data we found. It’s not perfect, but there’s almost no data on this out there.”

As with many nascent research questions, researchers will slowly triangulate on the consensus. As we overlay multiple sources, we’ll get a better sense of what is consistent and what isn’t. So for example, even though the ESA estimates 41% female gamers and we see 18.5% in our sample (with the bias towards core gamers), the underlying findings are consistent–the game genres that the most frequent gamers in the ESA report are playing are exactly the game genres we find have the highest % of female gamers.

The Genres We Analyzed

Game genres are incredibly messy things. They evolve and overlap and hybridize over time. In many well-established genres, subgenres are common. This means that asking gamers to respond to genre labels yields messy data.

We decided to take an approach based on specific game titles. In our analysis, we manually picked popular game exemplars to create genre groupings. For each game, we calculated the proportion of its gamers that are female. And then we calculated the genre group average. So for example, when we say High Fantasy MMOs, we specifically mean the group average of gamers who enjoy playing World of Warcraft, Rift, Lord of the Rings Online, EverQuest II, and The Elder Scrolls Online.

In our analysis, we manually picked popular game exemplars to create genre groupings.

The Game Genres We Analyzed and Their Exemplars

Genre Averages of Female Gamers Range From 2% to Almost 70%

Here’s a chart of all the genre group averages in descending order. The percentages listed refer to the proportion of gamers within each genre that are female. So for example, the 69% for Match 3 games means that of the gamers who mentioned a Match 3 game in the data, 69% of them were female. The 69% does NOT mean that 69% of female gamers play Match 3 games.

The percentages listed refer to the proportion of gamers within each genre that are female.

It bears pointing out that most gamers play a variety of games across genres, and a high participation rate in the chart doesn’t mean that gamers (whether male or female) only play that genre. 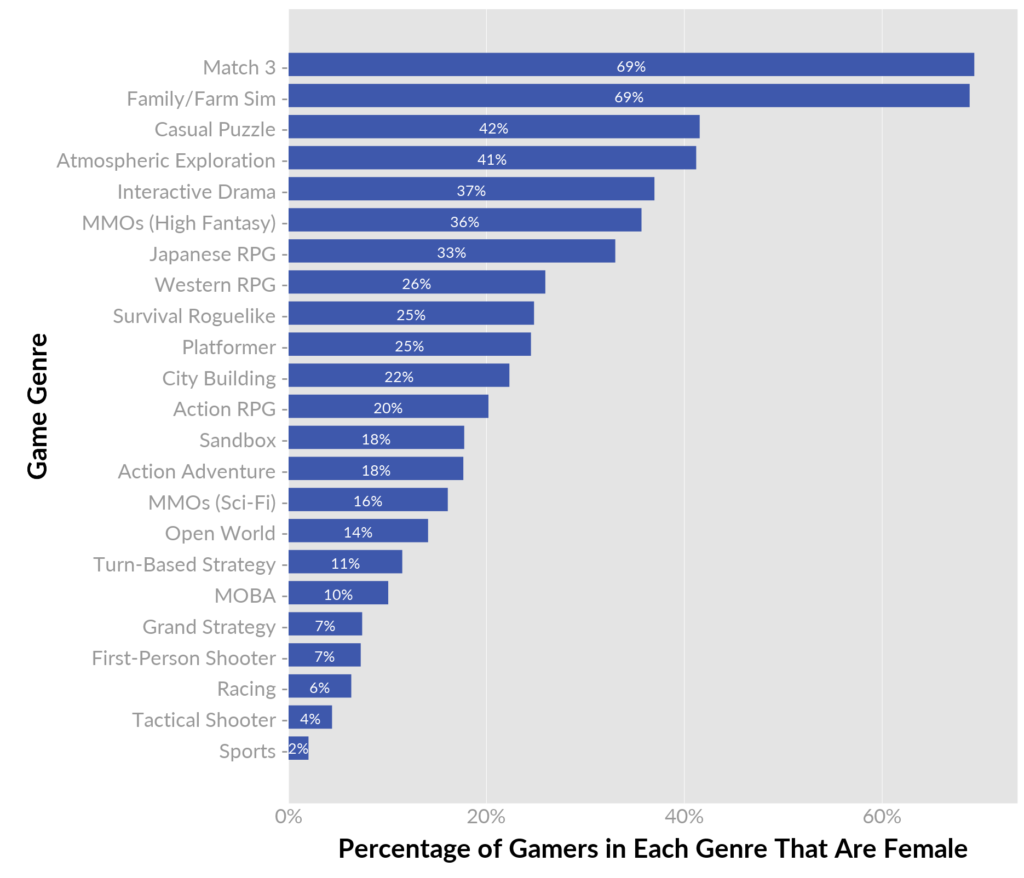 1) Match 3 and Family/Farm Sim Gamers Are Most Likely To Be Female.

2) Tactical Shooter and Sports Game Players Are Least Likely To Be Female.

3) The Variance in Female Gamer Percentage Across Genres is Large.

The genre averages range from 2% to almost 70%. This is a 35-fold difference, and illustrates why an overall statistic for all gamers (ignoring genre) can be misleading and confusing.

This is a 35-fold difference, and illustrates why an overall statistic for all gamers (ignoring genre) can be misleading and confusing.

4) World of Warcraft is an Outlier Among High Fantasy MMOs.

23% of World of Warcraft gamers are women. This is substantially lower than the group average (36%). A lot of game researchers (Nic and I included) focused on studying WoW as an exemplar of online gaming, but it looks like WoW was not only an outlier in terms of market success, but also in terms of its demographics relative to other games in the genre.

As we assembled the original MMO genre, we noticed a difference between High Fantasy and Sci-Fi MMOs, and decided to split the genre. This highlights the gender disparity in appeal based purely on thematic elements. High Fantasy MMOs have more than twice the percentage of female gamers compared with Sci-Fi gamers (36% vs. 16%).

This highlights the gender disparity in appeal based purely on thematic elements.

6) Star Wars: The Old Republic is Skewing the Genre High.

SWTOR has almost double the Sci-Fi MMO genre average of female gamers (29% vs. 16%). Without SWTOR, the genre average would be 11.3%, at which point the group average for High Fantasy MMOs would be more than 3 times higher than Sci-Fi MMOs.

Among Open World games, Assassin’s Creed Syndicate is noticeably higher than the genre average (27% vs. 14%). And among Western RPGs, Dragon Age: Inquisition is also much higher than the group average (48% vs. 26%).

The differences in primary motivations between male vs. female gamers seem to underlie the current genre findings.

The Opportunity Space is Larger Than It Appears

The data hints at how none of these numbers are set in stone or represent some kind of hard ceiling. Note that variations within the same genre can be much larger than variations between genres. For example, Dragon Age: Inquisition has double the genre average (48% vs. 26%). In fact, this 48% is higher than the next 5 genre averages. This means that the opportunity to attract female gamers may be a lot larger than what the chart is showing, especially if you’re the first ones to figure it out in your genre.

Variations within the same genre can be much larger than variations between genres.

It’s also easy to read the genres in the chart and pin the cause solely on gender differences in gaming motivations–e.g., women simply don’t like X or Y game mechanic, but there may be a lot more going on. For example, games on the bottom of the chart tend to not have female protagonists, tend to involve playing with strangers online, and tend to have a lot of rapid 3D movement which can lead to motion sickness (which women are more susceptible to). Low female gamer participation in certain genres may be a historical artifact of how motivations and presentation have been bundled together and marketed.

As we saw in our analysis of Idle Clicker games, established genres are ripe for deconstruction in potentially fruitful ways. The most important takeaway is not to conflate what the numbers currently show with what the numbers could be.

If you spot any other interesting differences in the chart or data, tell us about it in the comments.

Stay up to date with our findings by subscribing to our newsletter!