7 Things We Learned About Primary Gaming Motivations From Over 250,000 Gamers

In the Gamer Motivation Profile (for video games), we measure 12 distinct motivations for each gamer. One way to get a concise picture of all the data we’ve collected is to focus on primary motivations—the motivation that each gamer scores highest on and is most important to them. In this post, we’ll step through what we learned when we compared the primary motivations of different demographic segments.

The Gamer Motivation Profile allows gamers to take a 5-minute survey to get a personalized report of their gaming motivations, and see how they compare with other gamers. Over 250,000 gamers worldwide have taken this survey. The 12 motivations that are measured in our model were identified via statistical analysis of how gaming motivations cluster together.

See how you compare with other gamers. Take a 5-minute survey to get your own Gamer Motivation Profile.

Each motivation score we calculate is normalized against the full dataset—i.e., how other gamers responded to those same questions. Thus, a perfectly average score is 50th percentile, while an 80th percentile means you scored higher than 80% of the gamers in our data. For the current analysis, we assigned each gamer’s highest ranked motivation as their primary motivation.

1) The Most Common Primary Motivations for Men are Competition and Destruction.

For all the charts in this blog post, we list all 12 motivations in descending order, from most common to least common primary motivation. Thus, in each chart, all the numbers add up to 100%. 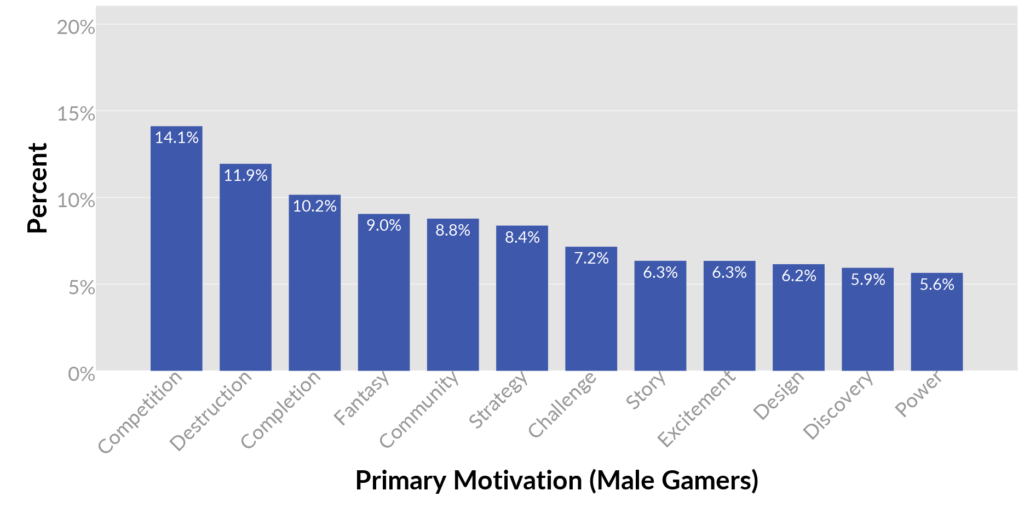 2) The Most Common Primary Motivations for Women are Completion and Fantasy.

For women, Completion (get all stars/collectibles, complete all missions) and Fantasy (being someone else, somewhere else) are the most common primary motivations, while Excitement (fast-paced, action, surprises, thrills) and Challenge (practice, high difficulty missions) are the least common.

These gender differences seem to align with stereotypes, but as we’ve pointed out before, age differences are often just as large if not more so. We’ll touch on age later in this post.

3) Women are More Polarized in Terms of What They Care About in Gaming.

The two graphs for male and female gamers have the same scale on the vertical axis (0%-20%). Note that the distribution among the men is more even, whereas it’s steeper among women.

Men’s gaming motivations are more spread out and harder to cover, whereas it’s easier to cover more ground among female gamers.

While this pattern of polarization is clear, what’s not clear is why this difference exists. It may be an artifact of how games are marketed to women, a self-fulfilling prophecy among game devs, or a genuine difference in how men and women approach gaming and play in general.

4) For Non-Binary Gender Gamers, Fantasy and Design are Most Common Primary Motivations. And Their Preferences are Even More Polarized.

Fantasy (being someone else, somewhere else) and Design (expressing individuality, customization) were their most common primary motivations, while Power (powerful character, equipment, stats) and Excitement (fast-paced, action, surprises, thrills) were least common. 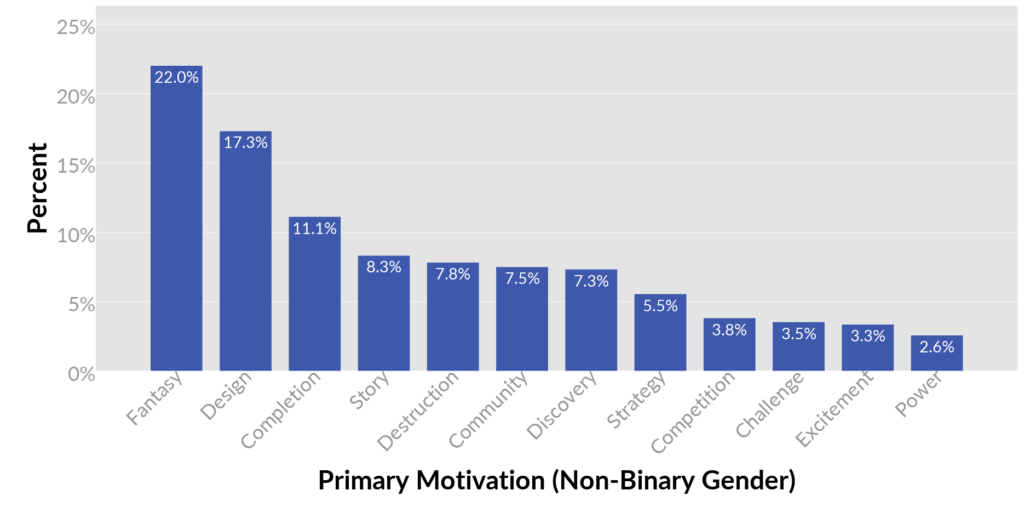 The polarization here is more extreme than what we saw before. The difference between the most common and least common primary motivation is a factor of 8.5 (i.e., 22.0% / 2.6%). And the top 3 motivations cover 50.2% of all non-binary gender gamers.

Given that non-binary gender is a catch-all category that covers a large set of gender identity labels, the most surprising thing about this chart is how highly consistent their collective gaming motivation profile turned out to be.

5) For Young Gamers, Competition is Most Popular, and It’s Almost 50% More Frequent Than the Next Most Popular Motivation (Destruction).

For the youngest age segment in our sample (ages 13-25), Competition and Destruction were the most common primary motivations, while Discovery and Power were the least common. 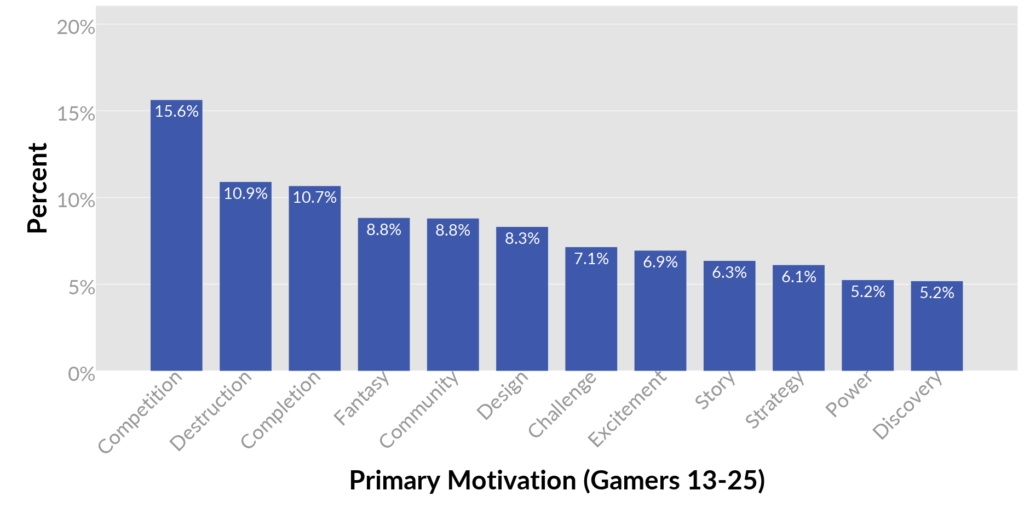 The drop between the top and second most common motivation here is the largest drop among all the graphs presented in this blog post (as a proportion of their frequencies).

6) Among 36+ Gamers, Competition Drops from 1st to 9th Place. Fantasy and Completion are Most Common.

For the older gamers in our sample, the most common primary motivations were Fantasy and Completion, while the least common were Excitement and Challenge. 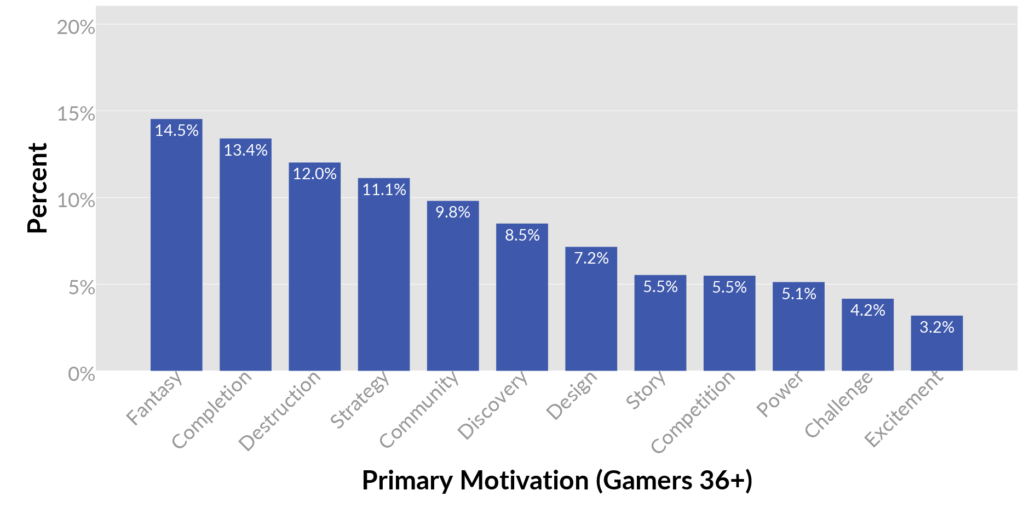 The huge drop in the popularity of Competition is something we’ve covered in an earlier blog post. Among the 12 motivations in our model, the appeal of Competition declines the most rapidly with age.

7) Completion is the Most Low-Risk, High-Reward Motivation.

One finding that surprised us was how consistently high Completion (get all stars/collectibles, complete all missions) placed across all the charts. Whether we’re comparing gender or age segments, Completion is always in the top 3. In this sense, Completion is a very low-risk, high-reward motivation.

Whether we’re comparing gender or age segments, Completion is always in the top 3.

It helps explain why games that emphasize Completion, such as Pokemon Go, can be so broadly appealing across different demographic segments, especially when these games also steer away from motivations that are more volatile and polarizing, such as Competition.

Stay Up To Date with Our Findings

Join our newsletter to stay up to date with our data-driven insights into video gamers and board gamers. When new findings are released, you’ll be the first to know.