Here at Quantic Foundry, we’re always experimenting with new ways of visualizing and making sense of the data we have collected via the Gamer Motivation Profile. In this post, we’ll describe a Design Rubric Map that we’re working on.

If you’re a regular reader of our blog and familiar with how we collected our data, feel free to skip the next section.

The Gamer Motivation Profile allows gamers to take a 5-minute survey to get a personalized report of their gaming motivations, and see how they compare with other gamers. Over 239,000 gamers worldwide have taken this survey. The 12 motivations that are measured in our model were identified via statistical analysis of how gaming motivations cluster together.

The Meaning Behind Variance

When we create genre maps, such as these for the Shooter genre in June, one basic way to identify the most salient motivation axes is to pick the two motivations with the highest standard deviations. These are the motivations that vary the most among gamers (in that particular genre space).

But there’s a more important meaning behind these variances. When a motivation’s variance is low:

When the variance is low, it is easy to achieve broad coverage because of the narrow audience spread.

On the flip side, when a motivation’s variance is high:

To generate the Design Rubric Map of shooter gamers, we sampled all the gamers (~40k) who mentioned at least one of the game titles from the earlier post on shooter games.

The standard deviation only captures part of the picture though. A motivation may have low variance both because it is consistently very important or very unimportant in the genre. To visualize importance as well as variance on the same map, we can plot the average score of the motivations against their standard deviations. Note that the 50%-tile on the vertical axis reflects the average score among our baseline gamer sample. 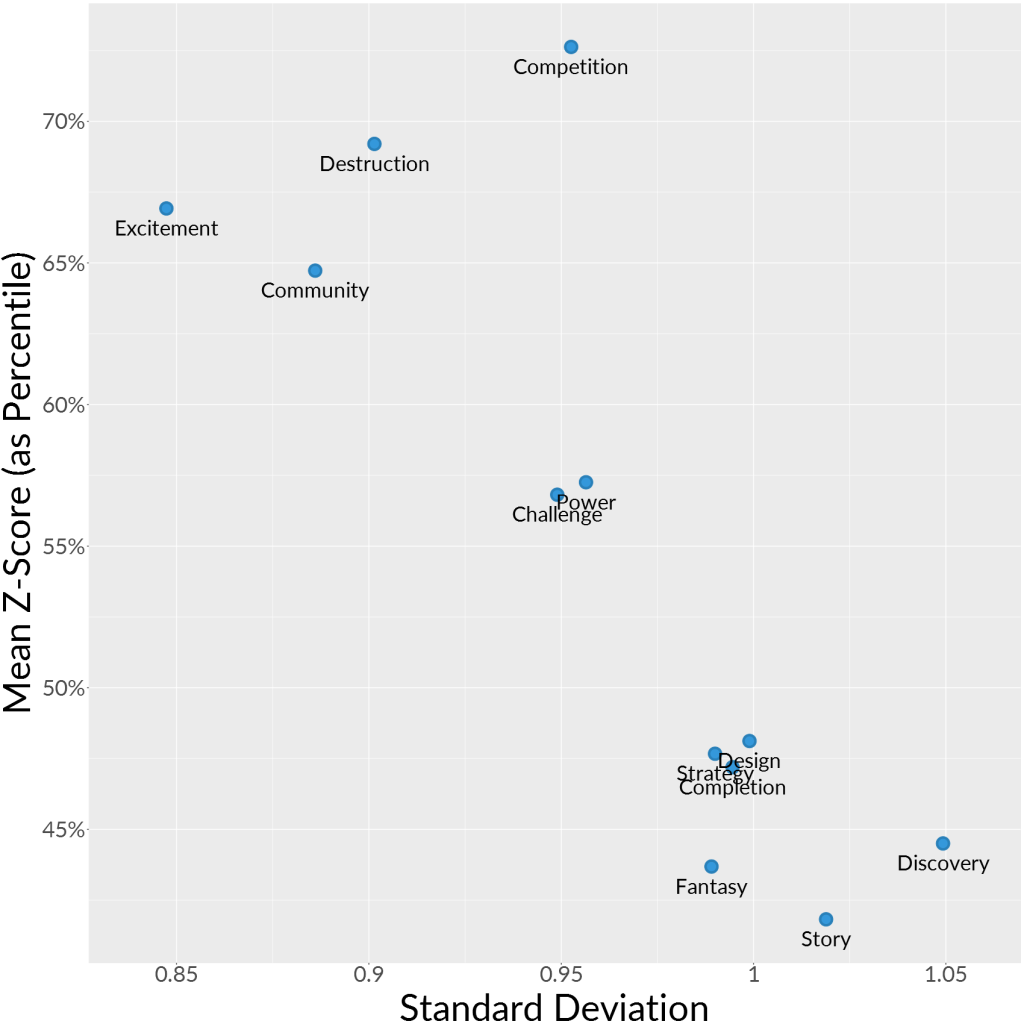 As we mentioned, the average score of motivations conveys the importance or appeal of that motivation. And the standard deviation conveys the coverage risk. Let’s relabel the axes and highlight some interesting zones of the graph.

Core Features: In the left-most zone are the motivations that have the most consistent scores among Shooter gamers. They are low risk in terms of game design because it is easy to achieve broad coverage of the audience. These motivations are typically the established and expected pillars of the genre. Here in the Shooter genre, the 3 motivations in this zone also score high on importance. Gamers expect Shooter games with lots of Destruction (guns, chaos, mayhem), Excitement (fast-paced, action, surprises), and Community (being on team, chatting, interacting). But this also means there is a great deal of constraint on the design decisions because there is a highly formulaic expectation of these motivations. For example, a turn-based Shooter without guns/bombs would alienate most Shooter gamers.

Safe Bets: In the middle zone are motivations with a moderate amount of variance. It’s still relatively easy to achieve decent audience coverage, and there is now more room for design choices and differentiation. For example, Power is about leveling up and making progress, and there is a moderate range of design possibilities around these game mechanics (i.e., complexity of character levels and weapon upgrades) that would still achieve decent coverage. Thus, even though Competition (duels, matches, leaderboard) is the most important motivation in the genre, its moderate variance means that there is more leeway around design choices than the motivations in the Core Features zone. In other words, games like Counter-Strike (higher on Competition) and Payday (lower on Competition) can both appeal to subsets of gamers in the Shooter audience.

Risky Options: In the right-most zone are the motivations with the most variance. Thus, there is a wider range of viable design options, but in every opportunity space, there is a shallower pool of gamers and a higher risk of alienating gamers who fall outside of that coverage area. There are two general approaches for attacking this space. The safer approach would be to create optional features that cater to a wider slice of the audience. For example, the game has a light narrative, but all the cut scenes and dialogue are easy to skip without impacting gameplay. The riskier approach would be to take a strong stance on one or more of these motivations to create a clear differentiator and target a more niche audience.

Other Ways of Slicing

This is still very much an approach we are experimenting with, so let us know if you spot any other interesting ways to slice the map, or other interpretations of the zones.

Let us know if you spot any other interesting ways to slice the map.