Last week, we presented a handy reference chart of our Gamer Motivation Model based on our data from over 140,000 gamers. Here it is again for ease of reference. 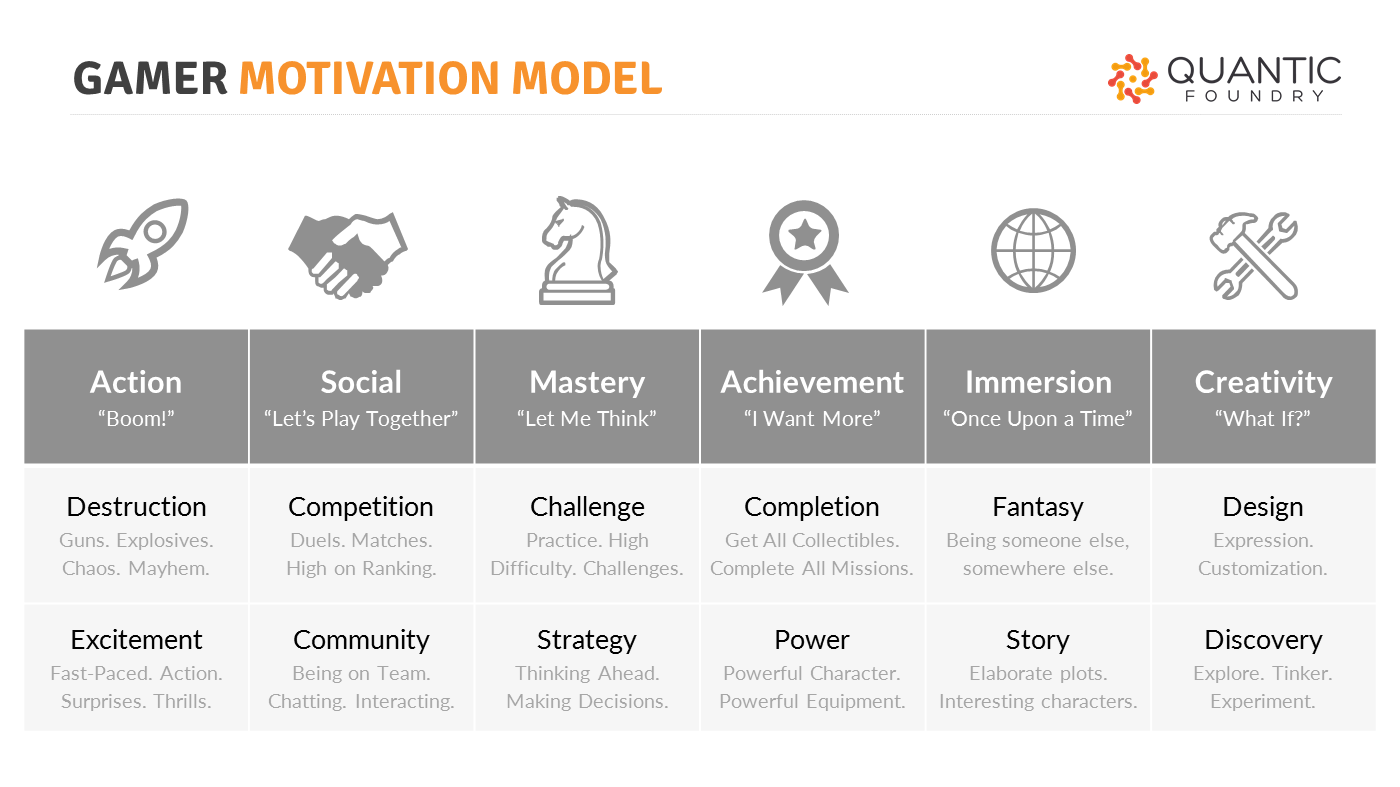 Want to know how you compare with other gamers on these motivations? Take a 5-minute survey and get your Gamer Motivation Profile.

As we mentioned, motivations in the same column tend to be correlated, while motivations in different columns tend to be less correlated. But that doesn’t mean that each column is completely unrelated to each other. And indeed, some columns are more related than others. So wouldn’t it be nice to get a visual map of these motivations that could capture these relationships better? Luckily for us, there’s a statistical method for that.

Wouldn’t it be nice to get a visual map of these motivations?

Multidimensional Scaling (MDS) is a technique that compresses the distances between a set of variables into a 2D map while preserving the original distances as much as possible. Variables that are more correlated are put closer together, while variables that are less correlated are put further apart. When we applied this technique to the motivation data, we found a higher-level structure to the motivations. 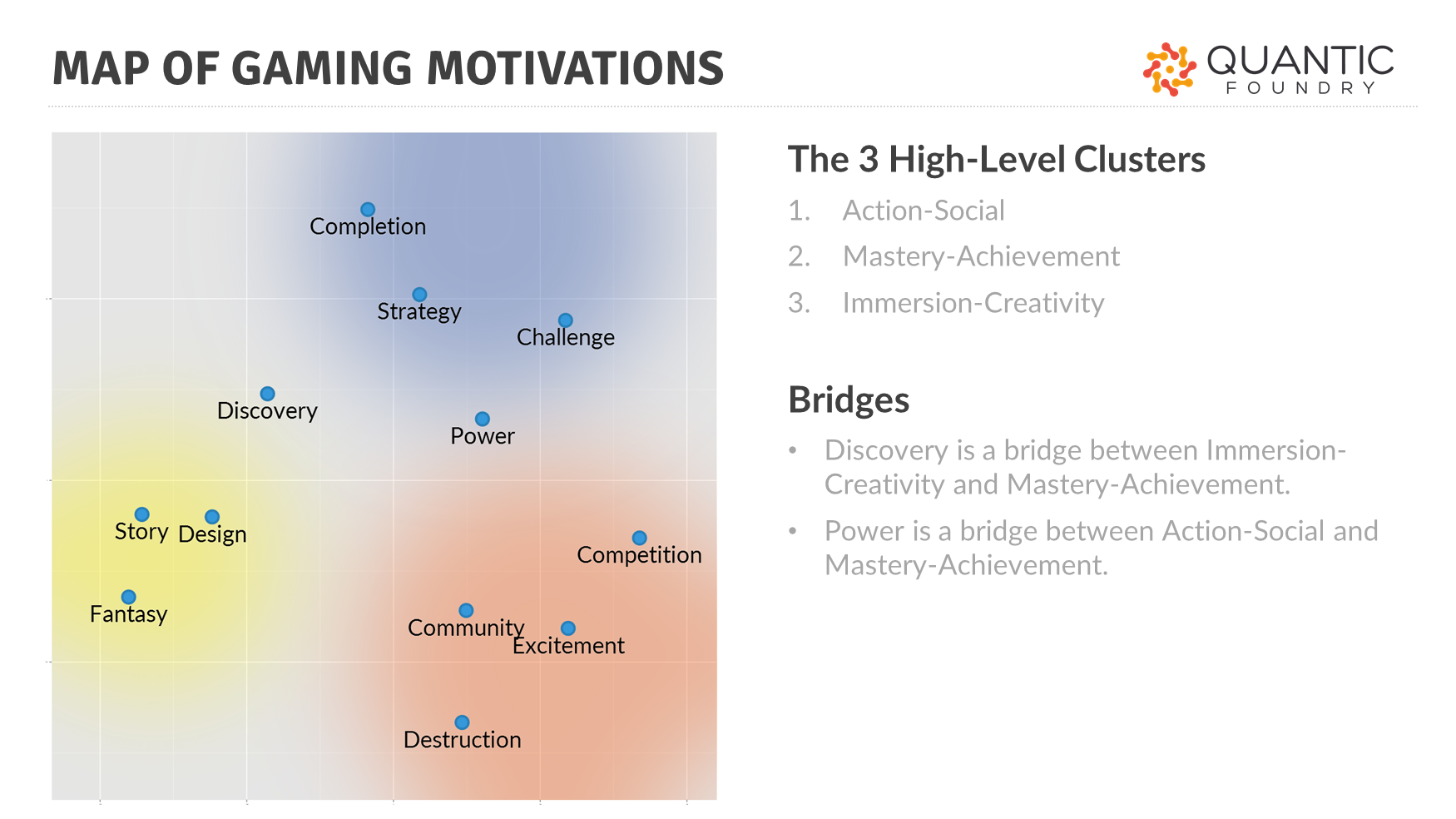 At a high-level, 3 clusters of motivations emerged.

We found motivations that act as bridges between these major clusters.

We didn’t find a bridge between Immersion-Creativity and Action-Social. This map might be hinting to us that there should be something here. On the other hand, there’s no reason why motivations need to fall neatly into balanced models where everything is bridged.

Think of it as a proximity map.

What the map is showing is the relatedness between all these motivations. So if someone scores high on a particular motivation, they are more likely to score high on the nearby motivations.

The opposite isn’t true though. Motivations that are farther apart are independent of each other; they don’t suppress each other. For example, gamers can score high on Action-Social and high on Mastery-Achievement.

The axes point to 2 primary dimensions on which motivations vary.

The axes produced by Multidimensional Scaling are not always easy to interpret. In this case though, we think they point to two interesting dimensions.

This motivation structure is consistent across all the regions we have data for. 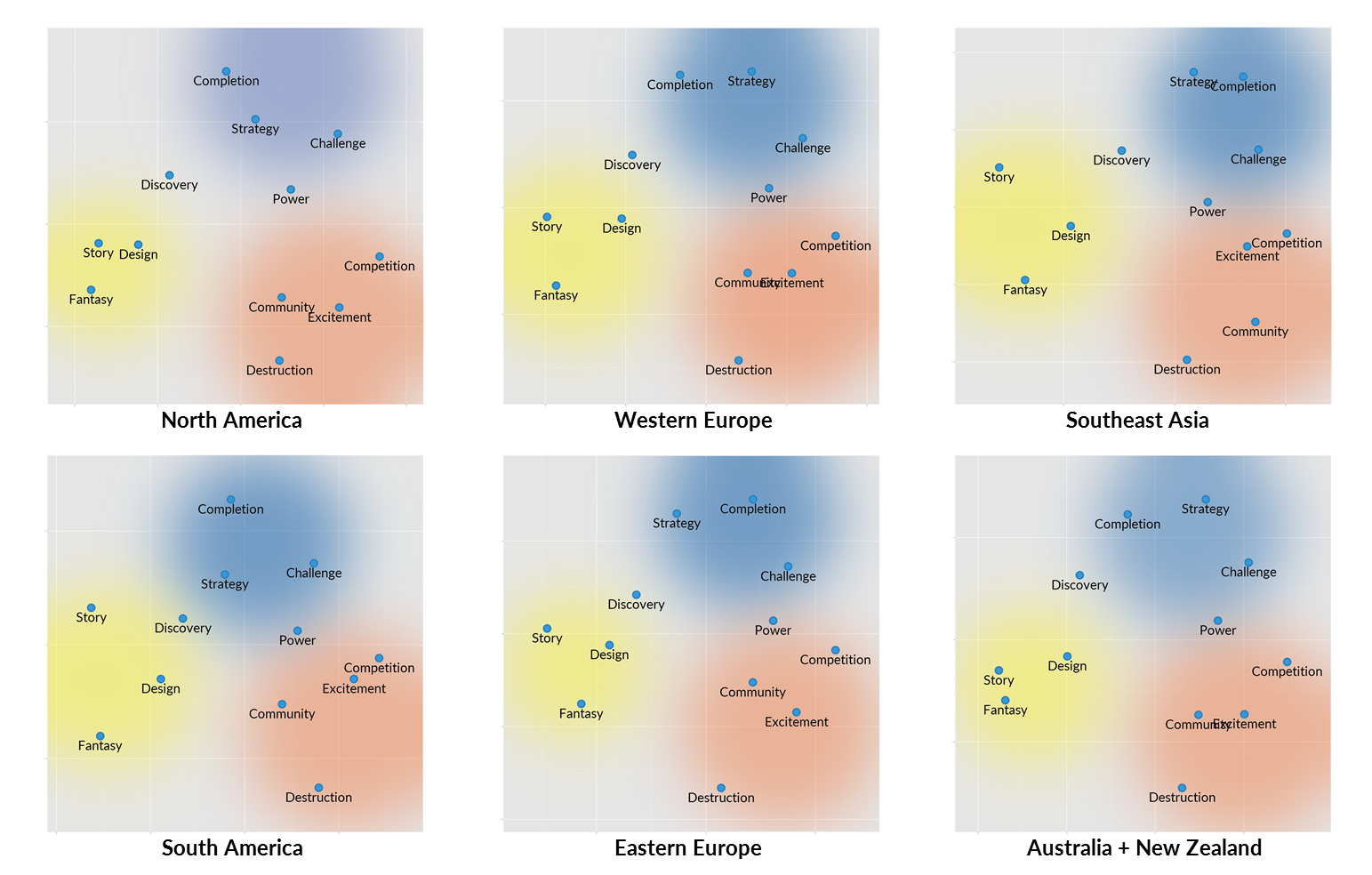 We’ve been hinting at this structure in our web app and reference chart.

This higher-level structure is the rationale behind our layout of the radar graph on the Gamer Motivation Profile, and the ordering of the motivations on the reference chart. In both, the motivations that are more related are placed closer together. 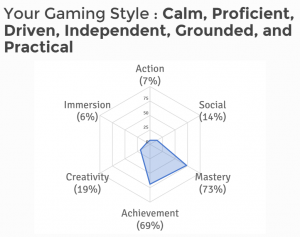 In our next blog post, we’ll describe how these 3 high-level clusters intersect with personality psychology and explain why the unintuitive Action-Social cluster actually makes a lot of sense.