In our last blog post, we presented a visual clustering of gaming motivations based on data from over 140,000 gamers, showing how they group into 3 high-level clusters. Here’s that map again below for ease of reference. In this post, we’re going to explain the unintuitive Action-Social cluster and show you that gaming motivations are expressions of key personality traits.

Want to know how you compare with other gamers on these motivations? Take a 5-minute survey and get your Gamer Motivation Profile. 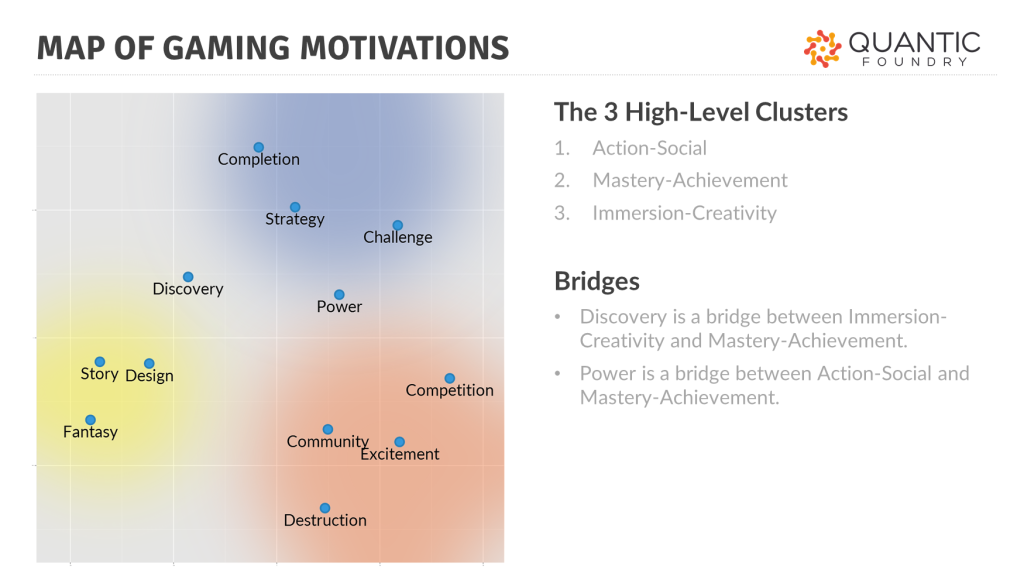 Action-Social isn’t hinted at in any Existing Model

When we first saw the Action-Social cluster emerge, we were a little stumped. This grouping is unintuitive and hasn’t been proposed by any existing model or taxonomy. For example:

The Action-Social cluster is unintuitive and hasn’t been proposed by any existing model.

Action-Social is an Expression of Extraversion in the Gaming Context

In the field of personality psychology, analysis of survey data has consistently found that personality traits cluster into 5 high-level factors, known as the Big 5 Personality Factors, and are consistent across different cultures. These factors are Extraversion, Conscientiousness, Agreeableness, Neuroticism, and Openness to Experience.

We’re going to focus on Extraversion first. In popular culture, Extraversion is often reduced to a notion of being outgoing or reserved. And this is indeed one of the key underlying differences between Extraverts and Introverts. But personality research has found that a constellation of related traits underlie Extraversion. Apart from the need for social interaction, Extraverts also crave excitement and sensory stimuli, are energetic, tend to be cheerful, and often assertive (or even domineering) with others.

Personality research has found that a constellation of related traits underlie Extraversion.

This is where the Action-Social cluster comes from; it’s the expression of Extraversion in a gaming context. This is why we see a clustering of excitement-seeking, gregariousness, interest in guns and explosions, and social assertion in the form of competition.

Here, the mapping to the gaming motivation clusters is a little more obvious. The Mastery-Achievement cluster (focused on long-term goals and planning) maps to Conscientiousness, while the Immersion-Creativity cluster (focused on fantasy and discovery) maps to Openness to Experience. 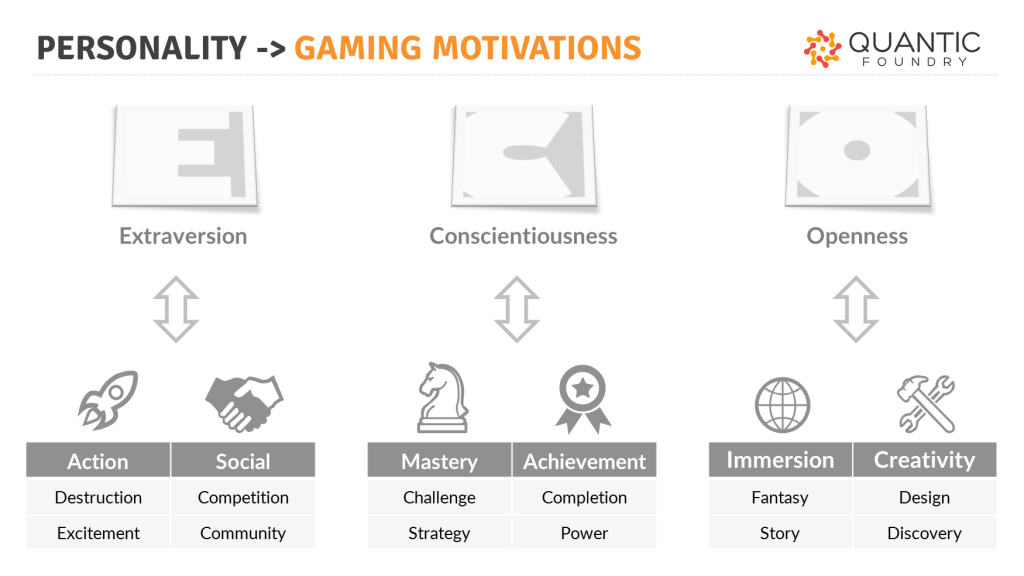 What About the Other Two Big 5 Factors?

The remaining two Big 5 factors are Neuroticism (moody, anxious vs. calm, stable) and Agreeableness (sympathetic, compassionate vs. skeptical, analytical). We didn’t find clear motivation clusters that mapped to these personality traits. There may be multiple reasons for this:

Games are a form of Identity Management

Games are often stereotyped as escapist fantasies—where people get to pretend to be something they’re not. But what the data shows is that gamers play games that align with their personalities. In the same way that people select the news and media that reinforce their worldviews, gamers select the games that reinforce their identities. For example, gamers who are extraverted prefer more social and action-oriented games. Gamers who are more conscientious prefer games with long-term thinking and planning.

The games we play are a reflection, not an escape, from our own identities. In this sense, people play games not to pretend to be someone they’re not, but to become more of who they really are.